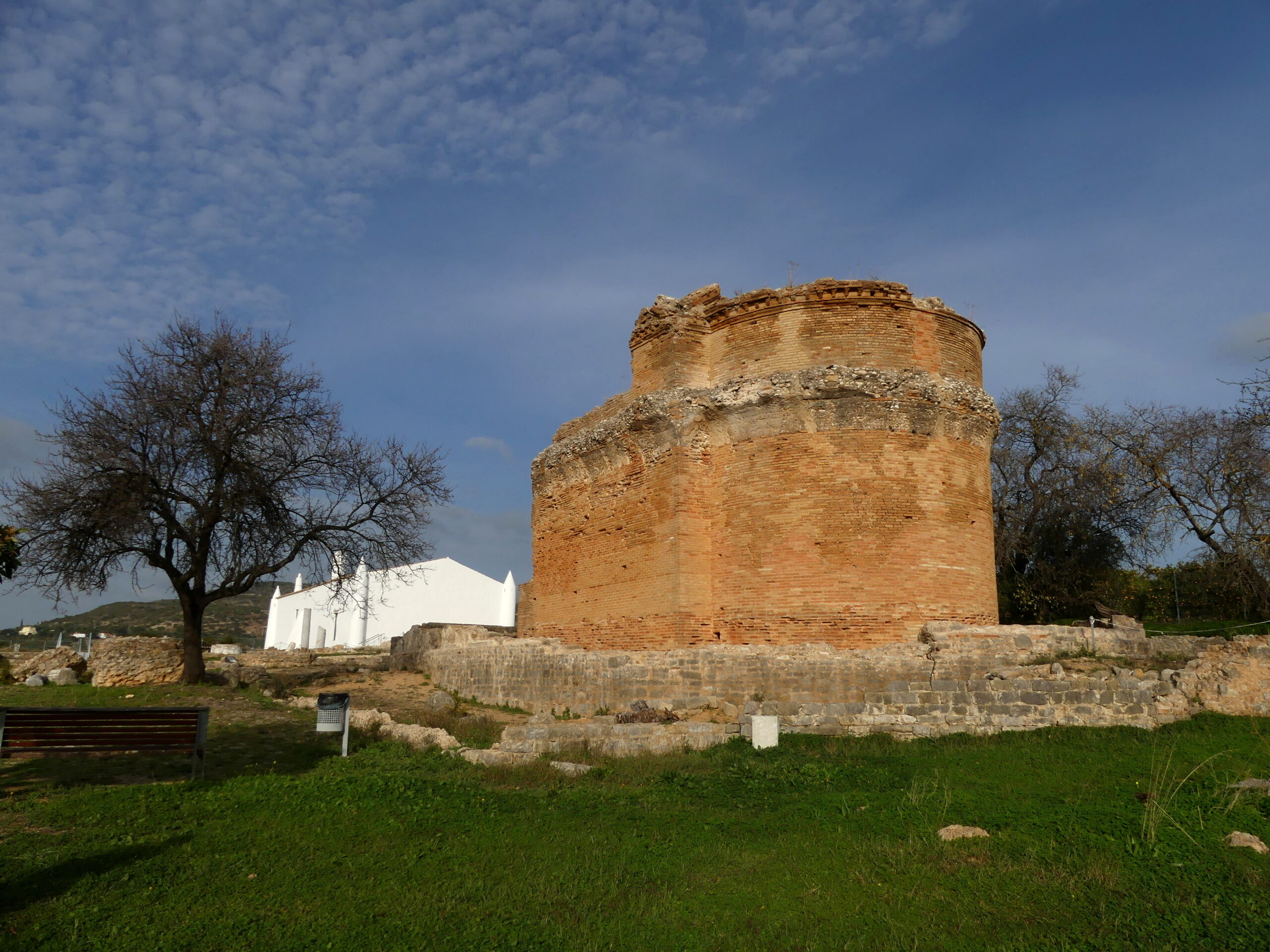 In brief: After the quiet of a 20th century villa converted to Ria Formosa reserve and a 2000-year old Roman villa, we find the buzz of a miniature Bethlehem on the first Christmas eve.

When Algarve beach activity is not exciting enough for you, you can enjoy a welcome splash of nature at the Ria Formosa Nature Park near Faro – just a part of a 60 kilometer reserve area along the coast. During the forty years or so since the conversion of a quinta once owned by poet Joao Lucio, this diverse area has fostered the return of fauna and flora that humans can savor.

We thoroughly enjoyed 2 to 3 hours, walking along its scrubby dunes, beside its marsh wetlands, and through its forests – then quietly admiring its duck-filled lagoons.

Here we walk through a charming grove of umbrella pine trees, which have displaced original native trees but still host a variety of small birds.

A stately grey heron strikes a pose atop these piney needles.

A curlew, with its distinctive downward curving bill, steps along in search of lunch along the wetlands

An azure-winged magpie searching out insects. They are found only on the Iberian peninsula and are resident year-round here.

A smartly dressed red-billed oystercatcher seeks underwater shellfish, under the watchful eye of a heron

A fluffy spoonbill digs in the water for food, though he kept refusing to show off the broad tip of his bill

Flamingoes frequent many of the wetlands of Portugal, including the Tejo River near Vila Franca and the wilder spots of the Algarve like this one.

A chestnut-sided male shoveler and mate, with their spade-like bills, scoop up a meal.

A noria like this one from the old farm  is a donkey-powered system developed by the Arabs for drawing water from wells, storing it in tanks, and distributing it to cropland, here generally fruit orchards and vegetable gardens

Below, near the noria, a flamboyant palm just reveals its bulbous fruit.

In the midst of the wild, reminders of human occupation at least 2000 years old. Here are tanks used in the operations of a large villa during the Roman era for salting fish to preserve and trade along the Mediterranean, as well as create a savory paste from the less appealing parts of the fish.

This find was a reminder how earlier cultures thrived along the southern coast of the Algarve district, or Portuguese Riviera. From the Phoenicians through the Romans, the coast held many advantages for abundant wealth due to trade (farm products and more, not just fish) across to Northern Africa as well as the Mediterranean.

Courtesy of the good people of Vila Real de Santo Antonio, one of the smaller towns along the Algarve southern coast, we could even revisit the town of Bethlehem 2000 years earlier – in miniature.

We were entertained for nearly an hour by its Presépio Gigante, a nativity view vastly more expansive than just a manger. After two decades of displays at this season, the presépio at Vila Real de Santo Antonio now spans 230 m2 (over 2500 ft2), replete with 5600 pieces including buildings, figures and props – at least 80 of which move.

In effect, it recreates the diverse livelihoods and diversions in the Roman town of Bethlehem at the first Christmas. However, like Renaissance artists, its designers include many local references to their own town, nearby fishing villages, and produce. Our short videos and images hopefully show why it’s a marvel.

For example, in this aerial view of Bethlehem as recreated in the presépio, the fort atop the hill looks much like a local castle near Vila Real and, in the lower left, workers harvest salt in a manner typical of Portuguese coastal towns from the Roman era thru today.

A brief tour of the hilly farmland on the way to town, including a man whacking olives off a tree.

A mill operated by a waterwheel grinds flour. Geese, swans, chickens and other animals (count them!) dot the banks of the river and pond while some people fish.

So much activity at a farm on this first Christmas eve near Bethlehem, including a water wheel turned by a donkey.

A local bakery where one woman prepares the dough and another tends the baking oven. Each figure is perhaps around 5 cm high, 2 inches.

The level of detail across the presépio is stunning. This textile shop is just one example, where the women take the raw fabric, pull it into strands, color it, and let it hang out to dry – all in miniature.

The buildings and activity intensify as we approach the Roman harbor, a feature more likely in a Roman town on the Portuguese coast than in Bethlehem.

A merchant checks the masted ships docked at his warehouse along the Roman harbor.

Workers labor at the shipyard near the harbor as two figures pass on the very edge of the scene (bottom center). Neither the workers nor anyone else in the town of Bethlehem seem to notice Joseph leading Mary atop the donkey or the starlit manger to which they are headed for the night. Oddly, it seemed to us, the presépio is really a display of the hours just before the nativity – rather than the nativity itself.

In the heart of town, with market activity whirling around it, a Roman amphitheatre fills up with patrons and Herod’s palace sits quietly beyond it. The residential buildings of the town scale the hillside.

Part of Bethlehem’s central marketplace, with flowers and plants for sale above and diminutive vegetables available in the stalls below.

Many of these same activities thrived at Milreu, also near Faro, one of several traces of the Romans in the Algarve. Milreu is the striking site of a huge villa formerly owned by a wealthy family and occupied during the first millennium.

The sprawling estate was largely self-sufficient, making wine and oil, supplying their operations with tools and equipment, growing food –using plenty of beholden labor for the purpose.

An overview of foundations remaining from buildings at the villa, with a restored 16th century farmhouse in back.

Excavated floor of an old church over which the farmhouse was built. Archeologists did a superb job of revealing both structures so that the uses of their chambers were evident.

The still lovely mosaic floors honor the wildlife and sources of livelihood at the villa, with fish rollicking around a Disney-like crustacean (between the two fish on the right).

A copy of a bust of Emperor Hadrian, who was punched in the nose during a later round.

View to a 6th century church from the bathing and changing rooms, with niches to store one’s things.

The imposing ruin of the 6th century church – one of the oldest in Portugal – still glows in the afternoon light, with the newer farmhouse in back. Earlier it was a temple honoring Roman water gods.

Fish on the wall mosaics pay homage to both the natural world nearby and the spiritual power of this Christian church from the later Roman era.

The play of fish in the mosaics brings us back to the natural world, as captured in art, and our inevitable return to the present day from Milreu’s Roman past.

A Garden and Delights in Lisbon