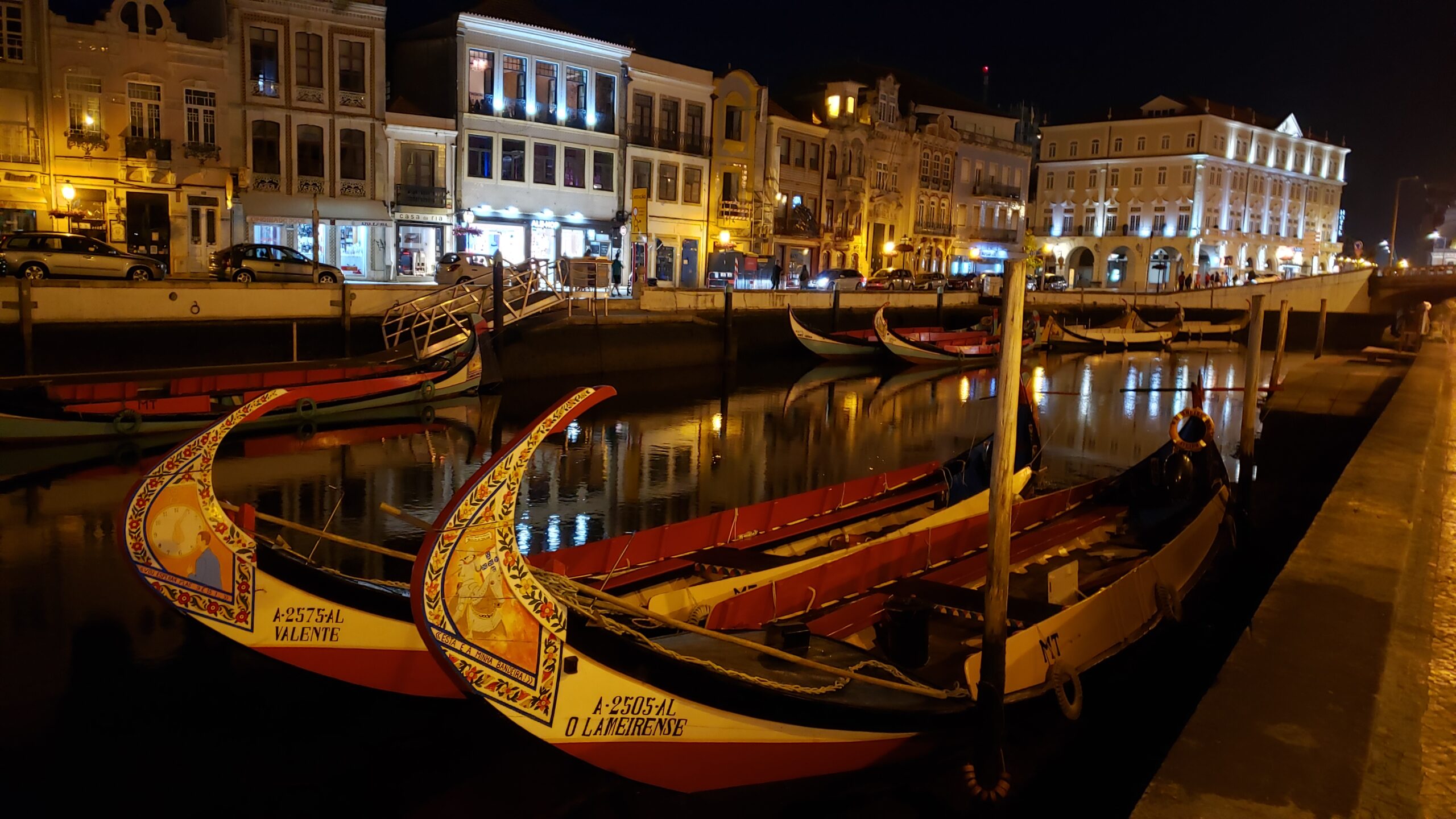 In brief: Artisanal salt production formed Aveiro, but it’s the canals and the gondolas that attract people here today.

The sea – its exploration and conquest – made Venice. The sea also made Aveiro – for reaping its salt and seaweed. Aveiro’s river mouth filled with silt over a thousand years, creating an extensive bay of islands and a lucrative business out of the saline waters. Residents produced an artisanal salt of prized quality – by hand. Their natural processes ensured its unique color, texture and flavor.

When transport started to bog down, the city dug canals to ensure ready movement of its harvest. Some of those working boats, outfitted with Venetian gondola prows, began to tour visitors like us around the town, not just salt – through canals lined with broad walkways and entertainments, past the old salt pans, in front of Art Nouveau buildings, and underneath the many bridges. For us, the town felt quite savory by day and incandescent by night.

The best way to start out in Aveiro is touring the canals and the town on an Aveiro “moliceiro.” The boat name means a carrier of seaweed, but can carry 30 or more tourists instead of bags of salt or seaweed.

Our motorized gondola (moliceiro) putters along the large side canal on which we stayed. A more recent addition to this canal was this old-looking mini-Rialto footbridge. Unexcitingly, this bridge, as well as the fancy cantilevered one behind, merely connects the central city to its free parking lot.

Numerous pedestrian bridges cross the Grand Canal, under which the touring gondolas motor. This is the one for devoted couples: instead of affixing locks of love, they tie ribbons of romance. We had a delightful lunch near this, watching the moliceiros pass by.

Downtown, as viewed from the Grand Canal at the edge of Aveiro’s huge pedestrian center. Behind a few of the gondolas, a number of 18th century buildings jostle against ebullient Art Nouveau facades built a century ago by emigres from Brazil.

And a portrait of three of the best of the Art Nouveau buildings that qualify this city for the European Art Nouveau Network of towns.

Aveiro, beautifully lit up at night along the Grand Canal.

Aveiro at dusk, looking out over a secondary canal from the viewpoint of the renowned fish market, set in the middle of the sprawling pedestrian zone. That’s the sleek, loopy pedestrian bridge at the end of the canal. As you can just detect at the right side, the outdoor bars were a lot busier this night than the restaurants. They were filled with mostly young and surprisingly mellow Portuguese as the national team tied Germany in the Euro2021 football championship. The next night we ate with friends at one of those restaurants on the left.

This inexpressibly ornate chapel – in the former Convent of Jesus and now the Museum of Aveiro – overwhelmed us with its endless detail. Other church interiors of the city may be beautiful, but hardly rival this one. Here, it’s matched a bit by a splendid choir loft and another convent chapel that pays tribute to its most famous adherent, Santa Joana. The regal daughter of King Afonso V, Princess Joana entered the Convent shortly after it was founded and, with her good and pious work there, earned eventual sainthood. Her story of moving from physical to spiritual riches also stirred some fine religious art over the centuries, including many examples displayed in the museum.

A quiet side street in central Aveiro shows off the various styles and features of the buildings here. This was once a working class neighborhood, but has seen much renovation work since then.

These plain structures are salt warehouses, few of which can still be found on the streets. But apparently the same family has conducted business here for many generations. Inside, 10 kg bags of local salt were piled up for delivery. The peaked roof style of these buildings was repeated over and over again in the older houses of Aveiro.

And salt production still continues the artisanal way at Aveiro – as well as at nearby Figueira da Foz – working hand in hand with nature. With low wood fencing and sluice gates, workers flood the salt pans, let the sun and wind remove the water, then push the brine around until drying is complete. Meanwhile, the flourishing ecosystem of the pans nurtures many organisms, most notably the many shore birds that clear out the tiny crustaceans in the pools. To us it felt like a peaceable kingdom.

Various statues on Aveiro’s main bridge crossing the Grand Canal honor its salty origins. This one recalls the mostly female salt-gatherers, with their traditional dress and reliable shallow basket. Another celebrated the pan workers who used a long-handled hoe to push the salt around and gather it.

In the past, the workers with hoes were all men; women hauled the salt in reed baskets. Not anymore, as was evident at Figueira da Foz. With her salt hoe, this woman pushes the briny mix around to promote the drying.

Salt begins to emerge in the pans at Aveiro, gleaming in the sun. The management of the process, including the arrangement of the rectangles, is much more complex than it looks, but the individual labor and natural drying techniques have changed little over the centuries.

Two of the dozens of flamingoes we saw as they shared the riches of the salty water.

A traditional wood shack keeps watch over the salt pans at Figueira da Foz. These store the salt, shelter the workers, and host occasional festive gatherings.

The wetlands near the salt pans flourish where the Mondego River flows just past the shacks in the distance and meets the sea. Here the workers also harvest seaweed by hand. In the background , the town of Figueira keeps its distance.

One of the black-winged stilts we found at Figueira da Foz and Aveiro. Maturing birds, baby birds, as well as adults – along with terns, gulls, hawks and those flamingoes – were the most visible indication of the abundant ecosystem of the pans.

This traditional vessel for hauling salt, placed high on an embankment, received a bright paint job and became an attractive shack for one of the salt panners – rather than a gondola for hauling the tourists.