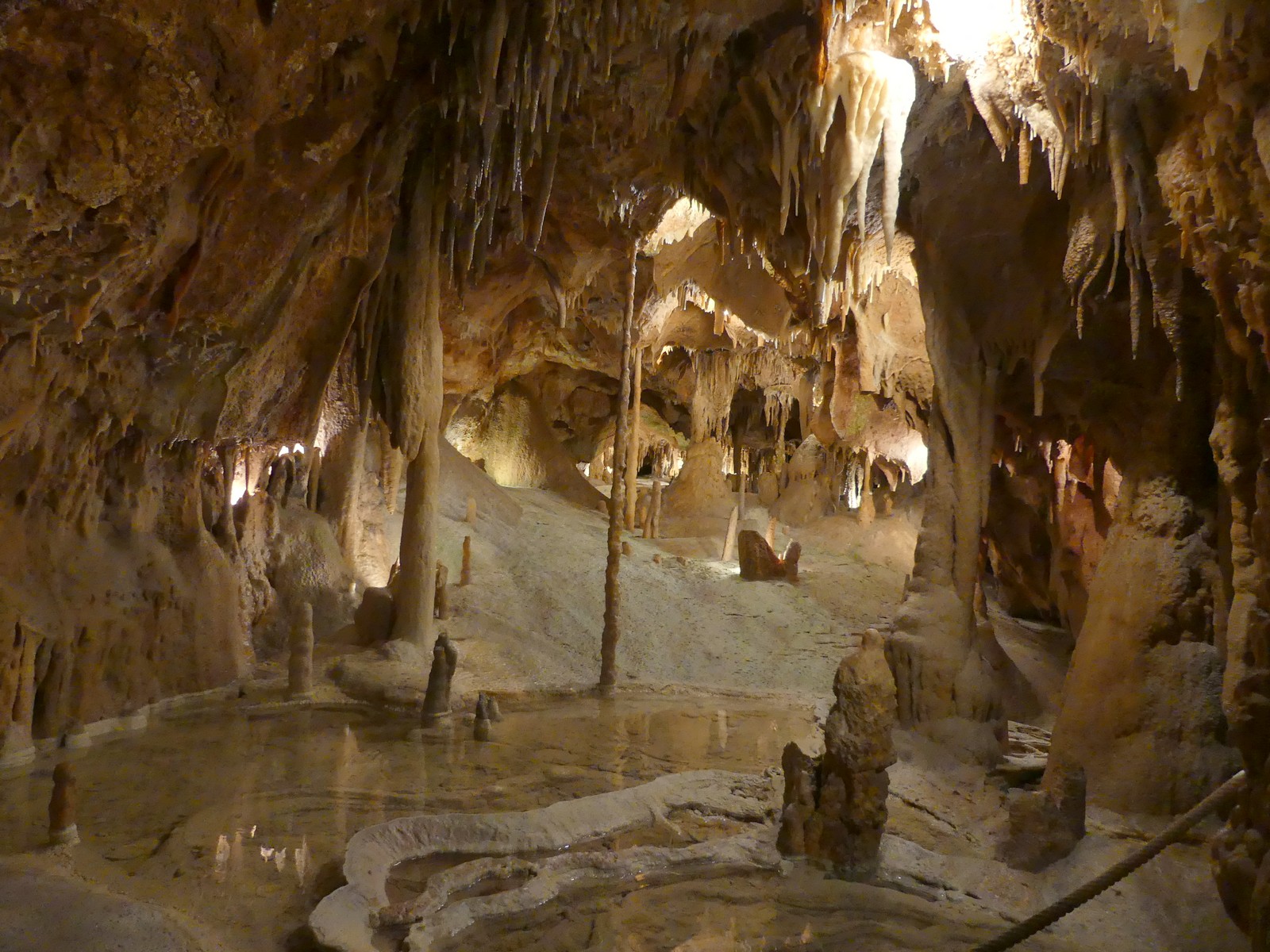 Toward the east of central Portugal, there is hidden treasure to discover amid the hills of a huge limestone-filled geological park (39,000 hectares) with the big name to match, Parque Natural das Serras de Aire e Candeeiros.

Green valleys slope down from the sheltering cliffs, which look quite foreboding when approached from the north. The old farmlands within are striated with walls roughly formed from the plentiful rock and heavily planted with olive trees.

The treasure hidden within this beauty consists of two extraordinary traces of the past: the remarkable tracks of ancient dinosaurs and the intricate limestone caves.

Dinosaur Monument within the massive limestone-filled park of Serras de Aire is the place where visitors are supposed to go.

However, we were directed by Google Maps to what seemed to be an active limestone quarry site. There a Forestry worker was pleased to show us footprints of meat-eating dinosaurs (think T-Rex) from 175 million years ago. “The other ones are the vegetarians,” she said, ”but here you need to watch out for the carnivores.”

Here is the claw-like footprint of a meat-eating dinosaur that walked on two legs, as described by the Forestry crew supervisor. The crew who was trying to preserve the site we accidentally found.

And below the red-white tape marks the trail of the carnivorous dinosaur who hunted around here.

We were so glad we had strayed cautiously by the meat-eaters, even after finally locating the main site, Dinosaur Monument, the “vegetarian” one.

That’s the one noted in the guidebooks.

There, we could see 20 amazing sets of tracks made by 70-ton sauropods, imprinted when their big feet plodded through mud that eventually turned to stone.

Above is Dinosaur Monument, here seen from a cliff face over it. Recent history seems to have been very important. About 25 years ago, the sauropod tracks were exposed during commercial quarrying. You can only detect the tracks close up as the surface is cracked and pitted due to the blasting.

The best and fullest of the sauropod tracks that we found. It starts from the upper left of the image and then turns to the right in the foreground. The lengthiest track, measured at 147 meters (nearly 500 feet), is the longest yet found in the whole world.

The large pad of a sauropod at Serra de Aire.

Drip. Drip. Drip. Our oohs and aahs were the only other sounds about 100 meters deep below ground as we explored the enchanting chambers of the Santo Antonio and Alvados caves. These are two of the many “grutas” between Óbidos and Fátima, created over millennia by the steady drip of calcium-rich water. Considered the best in all of Europe, the caves patiently await beneath the hills of Parque Natural das Serras de Aire e Candeeiros.

Immediately after entering Santo Antonio, we made our initial descent into its dazzling grand chamber (80 by 50 meters in extent and 43 meters deep), with its myriad of shapes and colors.

Beautifully lit and pockmarked wall of the grand chamber of Santo Antonio.

A resident bat deep within Santo Antonio cave. The bats enter and exit through natural chimneys poking through the surface.

Some engaging features of Santo Antonio.

A thrilling interplay of draperies and stalagmites on the way out of Santo Antonio.

Curtain walls drape the ceiling of this startling cavern.

A chamber in Alvados, with a watery pool

Yet another chamber in Alvados, with another water feature.

A watery chamber of toothy stalactites in Alvados.

Pure dripping of calcium carbonate from a cave roof.

An elegant chamber and pool deep within Alvados cave.