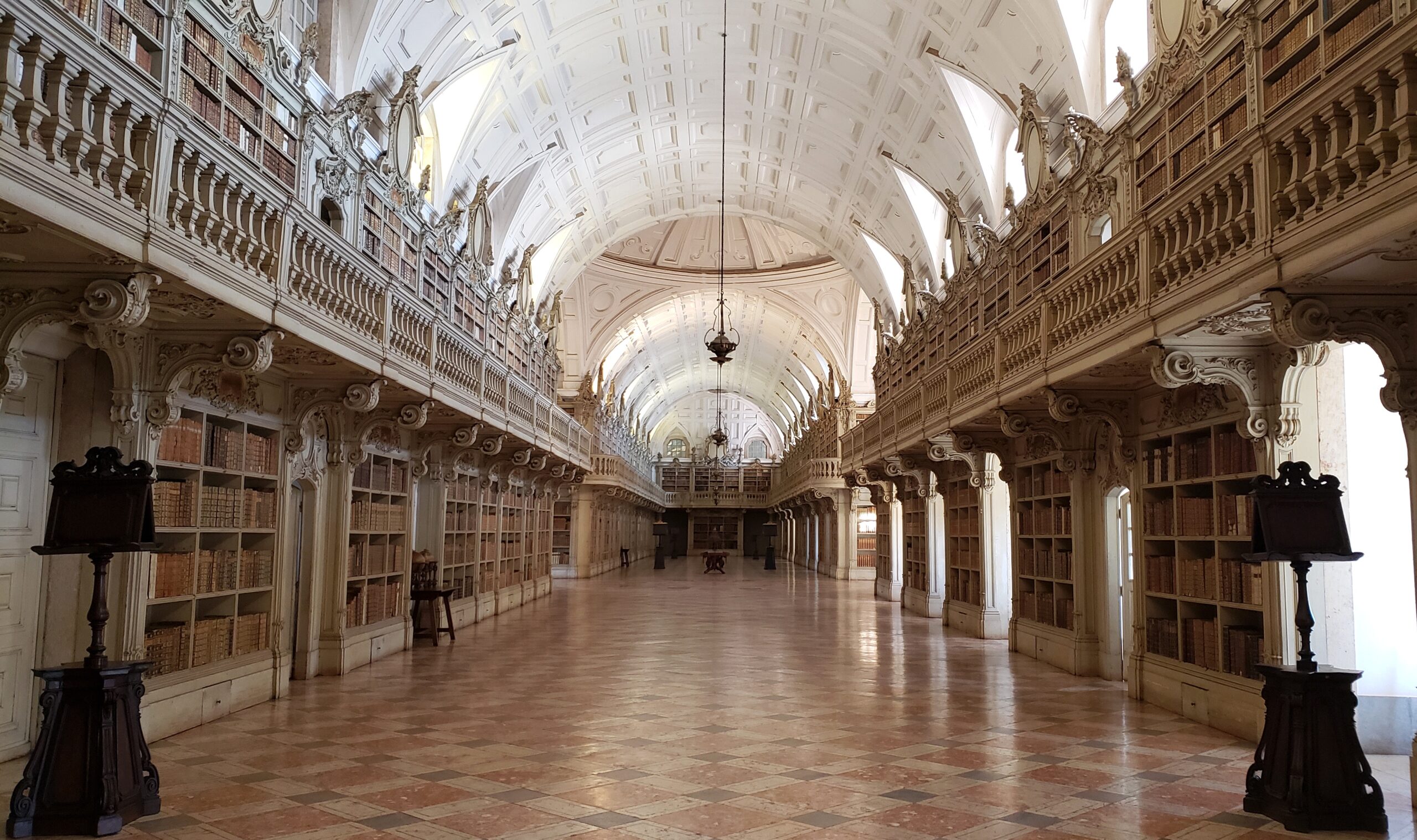 In brief: On a bright, cold day our trip near Lisbon juxtaposed a huge palace and a snug fishing village, cheering us despite the oncoming lockdown.

We rode out on the last day before another covid-19 lockdown, a cold but sunny day, to a huge palace and a small village very close to Lisbon. Like most trips, this one raised our spirits just before bleaker, greyer days closed us in.

Mafra is the location of a gargantuan palace, a UNESCO World Heritage site just a short distance from Lisbon. It was built by the rulers of Portugal between 1717 and 1755, then occupied occasionally and adapted by them until the early 1900s.

When complete, the Mafra’s palace and convent building included 40000 m2 in area (i.e. massive in sq. feet) with a limestone façade stretching 220 meters. We first approached it as the sun was rising behind, with the magnificent baroque church filling the center.

The palace began as a Franciscan monastery, as evidenced from this recreation of a monastic room.

The urn in the center held coals to keep the body warm during spiritual exercises, a need we could understand on this wintry day.

It might have been very cold both outside and inside the palace, yet we spent hours admiring its extended hallways and innumerable regal rooms. The longest hallway (232 meters, or 760 feet, long) was the stretch between the king’s chamber and the queen’s. Most of the rooms have been refurbished because the best of the original furniture was stolen away to Brazil by King Joao VI in 1808 as the French threatened.

The cold, hardly alleviated by the tiny heaters near which the guards stationed themselves, and the very few visitors gave the place an austere atmosphere. Other than guards, we saw only five other people during the whole morning.

Yet, in our long walk through, we could trace 200 years of the country’s kings and queens. And we could warm to the charmingly painted rooms, as their decorative style evolved from the baroque to the turn of the 20th century.

From a simple cloister just inside the visitor entrance, the Italianate dome of the church beckoned us.

Later, along one stretch of the palace hallways, glass doors revealed a loft view of the interior.

The arched Mafra basilica, a late baroque masterpiece, glowed from its abundant use of rosy marble. We also found similar vaults and marble designs within the royal chambers and connecting hallways.

Within the basilica, aisles connect the chapels along the sides of the church creating another illusion of a mirrored recession. The many dozens of holy statues like these are a treasure in themselves, the product of Italian sculptors and the efforts of the sculptural school that King Joao V aimed to initiate in Portugal.

Mafra’s most famous room is its elegant late 18th century library, 85 meters (about 280 feet) long. It’s home to 36000 beautifully bound and precious books, some of which date back to the 15th century.

An unusual cleaning crew maintains the hygiene: a host of bats enter at night to eat up insects that might otherwise damage the precious volumes.

The biblioteca is still an important resource for scholarly study: the arched niches of the ground floor contain simple wood desks for their use.

Walking the halls and rooms

A room painted around 1800 with scenes of Diana, the huntress, and her hunting associates.

On the upper right you can see a life-like representation of the mythic intimacy between the shepherd Endymion and the moon goddess Selene. Below it is another encounter on a 17th century silk tapestry: Alexander meets with the Queen of the Amazons.

The trophy room, a grisly record of the many royal hunts within the palace’s huge hunting grounds.

That old hunting space is now a public park adjacent to the palace.

Topping them all, we thought, was the splendid throne room where the king met visitors, though he was not available the day we appeared.

The paintings in the throne room dated from the Romantic era with the oversized figures around the walls showing off royal virtues like tranquility, knowledge and generosity. Panels below the virtues seemed to be carved into stone, but were just an illusion created by the painter. Similarly, the muscular figures at the end of the room seem lit by some source within the room, an effect that also proved to be a painterly illusion.

The dazzling sunbeams, however, do shine in from the cold outside.

For lunch and even more walking, we then headed nearby to the coastal fishing town of Ericeira. Harbor, beaches, big waves, fish are the natural attractions here. So, beach-loving tourists, residents of nearby Lisbon, surfers, and fish eaters normally keep this tiny village busy especially in the summer.

The cliffs of Ericeira loom over the harbor and town beach. Here fishing boats nestle immediately under fish stalls and farther below a tumble of white-washed houses.

Among those houses squatted the 16th/17th century Chapel of Saint Sebastian, a fisherman’s church with a colorful tile interior. Here we chatted with a few local residents. The surfer passing by was heading to some of the surf locales near town. A few kilometers farther up the coast is the town’s internationally known World Surfing Reserve, with its championship-quality waves.

Along the shoreline, a few people enjoyed a warming coffee and barely warming sunlight during a chilly afternoon.

Yet we could tell from the quiet, more than the cold, that we were there in the midst of a pandemic, on the day preceding another lockdown.

Wherever we walked, the town charmed us though it felt as deserted as the trompe-l’oeil drawing of a town square on a building fronting the harbor atop the cliffs.

Even on the pedestrian high street, where turn of the 19th century buildings graced our walk, only one other couple was walking about.

As at yet another plaza, where these expressive and bare trees awaited warmer times.

The End of the Olde World

Finding Heaven and Earth in Évora