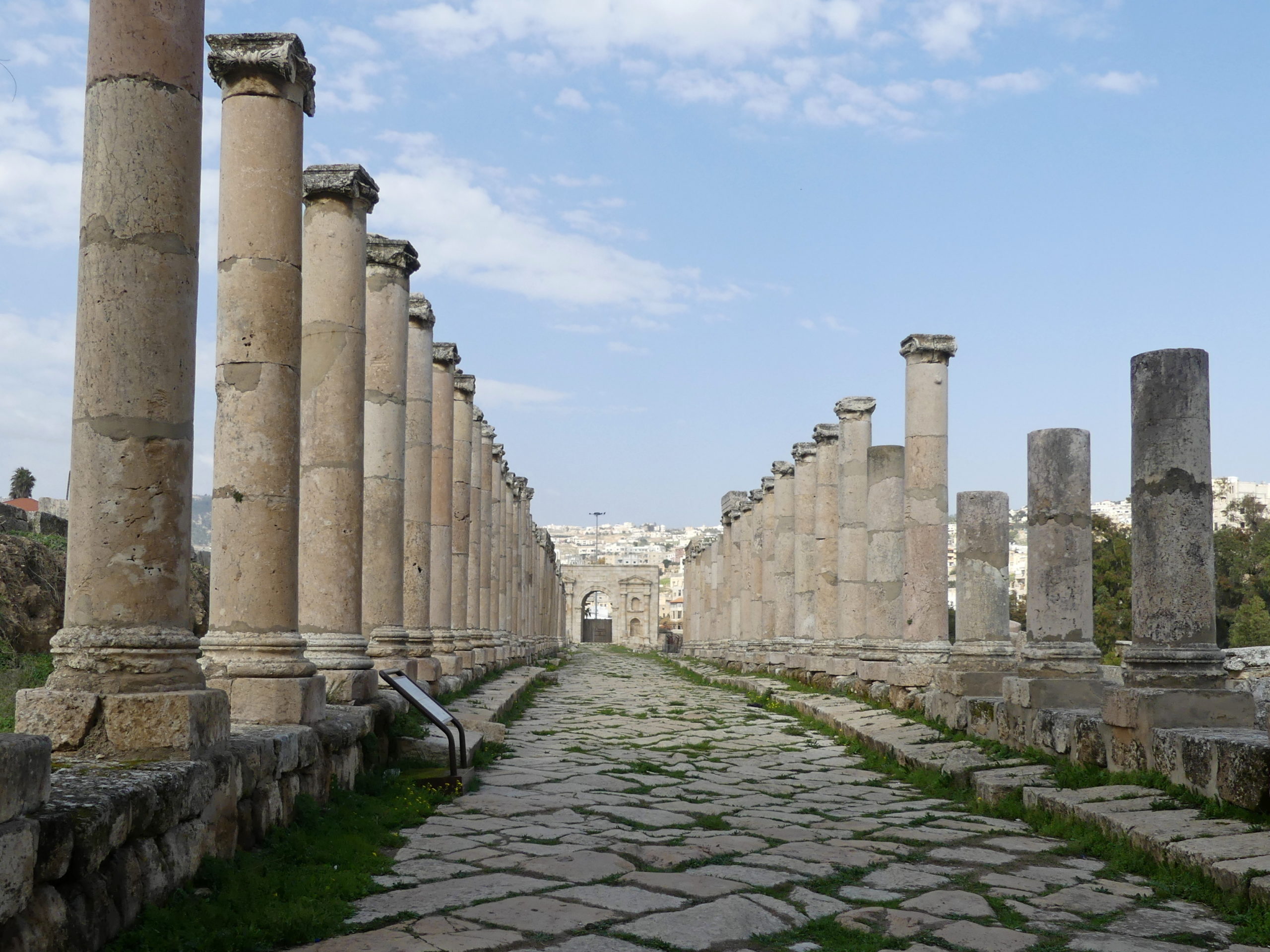 Jerash and Umm Qais, in the north of Jordan, were one of 10 regional centers for the Roman empire during the first centuries AD. As such, under the names of Gerasa and Gadara respectively, they served as the line of defense of the frontier along the so-called Arabian line. And they were centers for trade both east and west.

So, as with other outposts, these two cities were transformed into mini-Romes complete with temples, entertainment venues, waterways, villas, markets and meeting places. These two are among the best preserved of those old Roman cities at the colonized frontier.

And they stood as bookends in our touring of the country, the first and the last sites we visited.

What makes Jerash special today is how much of the Roman town remains, one of the greatest showplaces for Roman civilization anywhere in the world. Here is a brief tour.

“Let me show you the temple column you can move with your finger,” said a vendor of trinkets in the midst of the imposing Temple of Artemis, as it glowed in the late afternoon. Artemis was the presiding goddess for the city and mistress of hunting or fecundity. We had heard about this column, so we knew it wasn’t a scam, and he brought us right to it. Then he added, “If you have a smartphone, I can help you with the best photo ever…” We think he might be right.

Hadrian’s arch, 13 meter high (over 40 feet tall), is the gateway to Roman Jerash today, but was built solely to honor the emperor during a visit to the city. Statuary may not be there, but the gorgeous detail on the pediment still speaks grandeur.

Below is the stunningly intact forum of the Roman town, with 56 columns bordering a massive ellipse roughly 85 meters (280 feet) in diameter.

This was the center for city life and the markets of the town, and is visible from . The stones on the ground change size from the center to the perimeter in order to draw one’s attention inward. A ruined Temple of Zeus is above the forum in the foreground, and in the background to the left you can see the columnar street of the main street (cardo) and pillars of other structures as well.

Incredibly well preserved (and restored) Roman theatre at Jerash. Its acoustics are so good – due to the way sound bounces from the stage wall and is enhanced by the curve of the seating – that even performances today don’t need amplification – even if some of the performers do.

Back at the Temple of Artemis, with most of the original soaring columns, including the one that you can move with a finger.

The cardo, or main street of the town, a remarkable colonnade stretching nearly intact from the elliptical forum in the south to the other gate in the north.

Decorative stones which have no place to go yet in efforts to reconstruct other parts of Jerash. We call this stuff Roman building bric-a-brac.

Every Roman town had at least one Nymphaeum, an ornamental or practical fountain to celebrate the importance of water.

This one in Jerash is one of the finest fountain structures to be found. Another restored one is right near the souqs of central Amman.

In the later Roman period, after the emperors made Christianity the state religion, many churches were added to the adjacent hillsides. These structures are mostly ruins now, but surprisingly fine mosaics still decorate their old floors. Here is one section with elaborate geometric patterns and delightful animals. So many Byzantine churches were built in the overall region that you could make a whole trip out of exploring just the brilliant mosaics across Jordan.

A colorful Byzantine mosaic from a church at Jerash during the later Roman period, but now on display in Amman at a museum near its huge amphitheatre and forum. The caged bird represents the soul trapped in the body. The other liberated.

Just before actions to stem the covid-19 pandemic, including the closing of all historical sites, we ended our touring of Jordan much as we began it at Jerash, with our trip to this 2000 year old Roman city, another of the Dekapolis outposts of Rome. The city even pre-dated Roman occupation, as Gadara had been a thriving Greek city for centuries before the Romans remade it.

We drove to Umm Qais out of Jordan’s desert through a green, tree-covered landscape that contrasted sharply with the flat, dusty plains.

The ruins we found were not nearly as extensive nor in such fine shape as Jerash, but our visit was informative and engaging, a pleasing closure to all we had enjoyed in the country.

And also fascinating in a contemporary way: from a cliff’s edge we enjoyed a breath-taking panorama over four countries and their contested regions.

The water is the freshwater Sea of Galilee (or Lake Tiberias), with Israel and Palestinian Territories on the other side, Jordan on the near side, plus the Golan Heights heading north from across the valley.

Behind us still stood ancient Gadara’s main road lined with columns, the Decumanus.

Standing at the cliff’s edge, with a quiet street of 2000 year old Roman columns nearby, we could feel intensely both distant and recent history.

In the remainder of the ruins, we chose from seats made of volcanic basalt at a Roman theatre. We had to imagine, from our visits to Jerash and Amman theatres, what the stage area looked like.

We rested in the high-priced molded seats on the middle tier, all hewn from stone, complete with lumbar supports. The theatre once held 3000 attendees, but only four of us that day. We practiced our social distancing early on.

We marveled at an unusually well preserved set of market stalls, built out of stone as a support foundation for the forum that sits above it.

Nearby, we found what was left of the old baths and remnants of a 6th century Byzantine basilica whose base was this hexagonal marble platform.

Far down the Decumanus main street, in an area mainly consisting of broken pieces and occasional foundations, we clambered into a tomb that had been a Roman mausoleum.

Its impressive portals, stone door and columns lead to the empty stone shelves on which the dead were laid out. The grassy space above it, with all the broken pieces and some foundations, was the site of a Byzantine era basilica. Church dignitaries were later buried underneath including a deaconess named Helladis, a female church official whose iron sarcophagus was found during archeological work.

Umm Qais offered other interesting features. We wandered through a restored 19th century Ottoman cultural village that demonstrated the lifestyle of Jordanians at the time. We spent just a little time as we felt a bit ambivalent about it, mostly trying to understand the room arrangements that accommodated cultural needs and learning about the preoccupations of the time. The residents had been moved out in order to turn the overall site over to archaeologists and then tourists. The village was revived merely as a kind of museum for the latter.

And we found links to the biblical Herods. Herod the Great (father of Herod Antipas, that Herod) controlled Gadara (Umm Qais) until he died a few years before Jesus’ birth.

Father Herod’s connection with Gadara recalled for us the few pitiful columns remaining from the magnificent palace he built on this peak, high up in the mountains of central Jordan overlooking the Dead Sea.  The son Antipas later occupied it.

Here, as the story goes, Antipas’ stepdaughter Salome danced to win the severed head of John the Baptist. The palace’s splendor can only be imagined from the spectacular view over the landscape and the Dead Sea, on those days when the skies clear – along with the attractive swirls of the mountain’s limestone rock.