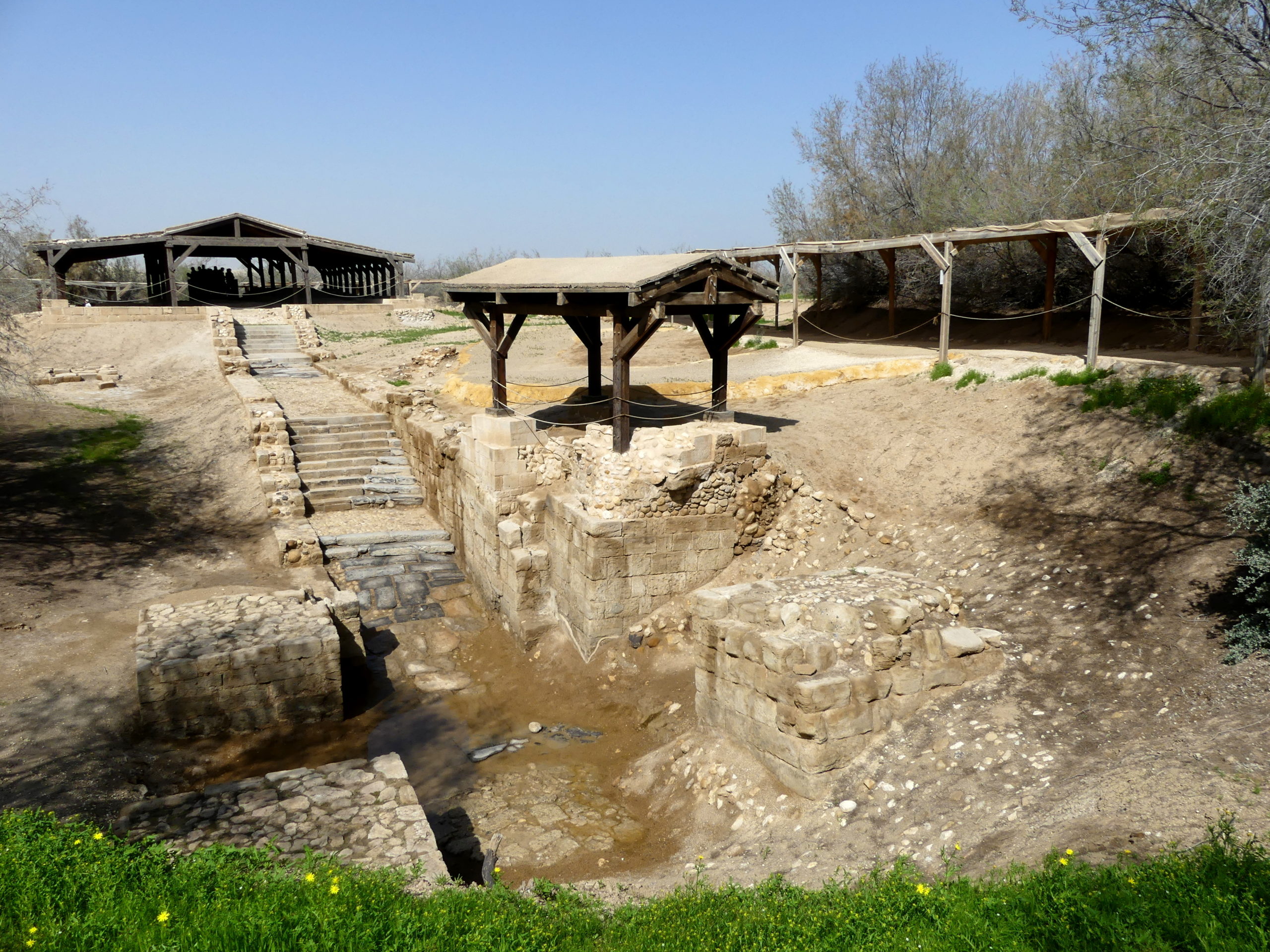 Stories in the Bible or Koran about such places and peoples as Jericho, Bethany where Jesus was baptized, Mt. Nebo where Moses frustratingly viewed the Promised Land, Elijah’s hill from which his chariot ascended, the Moabites and Edomites who fought with the Israelites, the Jordan River, Moses’ spring where he struck a rock for water, brother Aaron’s grave, Sodom and Gomorrah as well as Lot’s cave, the castle of Herod the Great and his son Antipas who ruled Jerusalem (see the post on Umm Qais), and so on.

Moving about the country of Jordan, we actually walked in these places, roamed where these people had been. Suddenly, the stories were no longer just inspired tales, but ones firmly located – along with us – in an astonishing landscape.

Two notable biblical events are said to have occurred at Bethany on the Jordan River, with another nearby.

Though no one knows for sure if this is the actual location, supposedly Bethany is where John baptized Jesus. By the 4th century AD, pilgrims and church builders had decided that it was the place, so that was good enough for us.

The cross-shaped baptismal font in the foreground is impressive, though the river has shifted its course away from the spot over the years. Uphill in the background are the remains of an early church built for the pious who made pilgrimages here back nearly 2000 years; more come today to be re-baptized in the river.

Secondly, on the outskirts of the site, moreover, a sign proclaims that Elijah ascended to heaven on a fiery chariot from a modest hilltop.

The third event was at Jericho.

We came to the edge of the channel where the Jordan River now flows, from the Dead Sea to the Red Sea. Here, across the river from Bethany is the modern town of Jericho. Many people were lined up to be baptized in the river, but there was no sign of the walls that came tumbling down or the trumpets Joshua used against the town.

Moses (Mousa) in the desert

Sometime, during the many years that the Israelites wandered the desert, Moses supplied them with water by striking a rock. We saw two sites reputed to be the location of that event.

At this one, in Wadi Musa, a town named for Moses (Mousa) and also the gateway to Petra, a natural spring still flows from underground through channels within a dedicated building. Locals come here to fill up containers with the pure, if not completely holy, water.

Nearing the end of his life, Moses climbed the mountain of Mt. Nebo where he was granted a view of the Promised Land, now Israel. On most days, including the day we visited, haze and mist obscure the vista for modern pilgrims.

Perhaps Moses had the same problem. In any event, he never reached the land himself, and his brother Aaron completed the mission. Oddly, the burial site of Aaron is honored atop a mountain near Petra in Jordan. Perhaps he lost his way and ended up back here as well.

Somewhere out there, far beneath the imposing Crusader’s castle at Karak, were likely to have been the ill-fated towns of Sodom and Gomorrah.

The two cities were consumed by fire and swallowed by the ground for their sinfulness, so it’s clear you won’t see their remains now. And perhaps another site nearby is the actual one anyway. But the canyon that is a vertiginous drop from Karak Castle seemed as good a guess as any…and perhaps more explicable. What with earthquakes opening up rifts and other volcanic activity in the area, perhaps the catastrophic event that destroyed the two towns made for an excellent opportunity to warn other towns against bad behavior.

With the onset of the covid-19 pandemic, we never reached Israel, where we hoped to walk again in the footsteps of holy books. Perhaps soon.