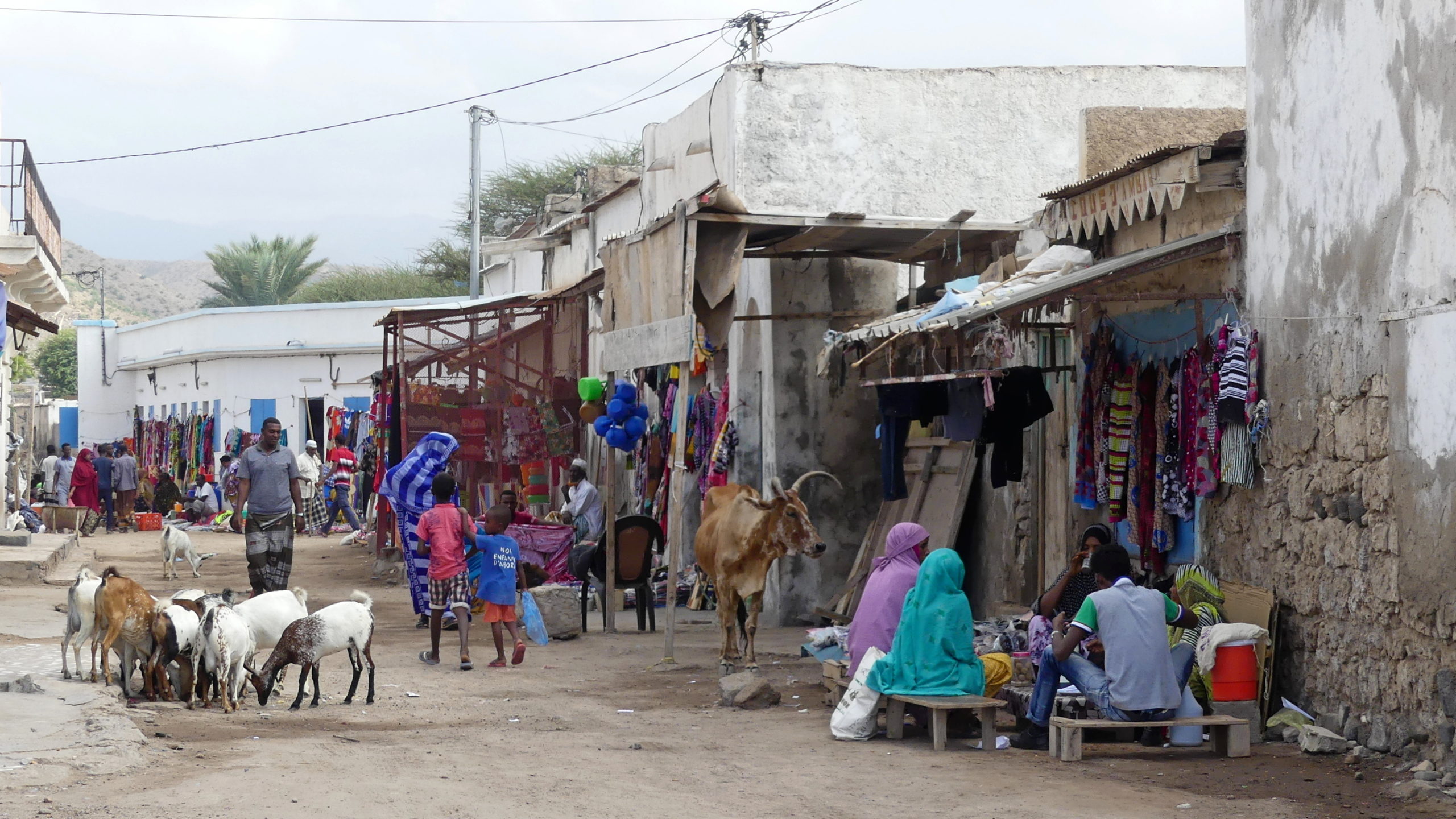 Just a two-hour ferry ride from Djibouti City across the Gulf of Aqaba in the Red Sea is the coastal fishing village of Obock.

This was the old capital of Djibouti, when the French occupied the country during the 19th century.

There is little to see from that time except a long, low-slung string of whitewashed buildings along the main street and the life of the intersecting streets.

The street in the photo above shows some shops off main street, with quite a bit of activity in the heat of the day. On the near right, a bull looks longingly at the refreshment table in front of a dress shop. The goats in a scrum to the left seem pre-occupied with their own options. In the center, a man walks toward us wearing the traditional – and frequently seen – wraparound cloth called a futah. The young boy to the right affirms the value of “nos enfants d’abord,” – “our children, first!”

Walking along the shore or out along its pier, you can see how much of a fishing village this is. While we were there, low tide left many of the boats adrift in the mud.

Children pranced around the ramshackle fisherman shacks along the muddy strand, with their swathed mothers close by.

Gilt crabs and birds like the brown booby prowled the barnacled pier where the ferry landed a few times per week.

Atop the tallest hill at Obock, we found the decaying metal structures of the old French garrison when Obock was its capital. We were perplexed why the buildings, all with sloping sides, were made of metal. But they proved much cooler inside than we expected in the afternoon heat.

The tower gave a commanding view of the Red Sea. Here you could definitely monitor traffic on the sea – or threats. The garrison’s land may soon become the site of a technical school, a vantage point of a far different sort.

About an hour’s drive away, Tadjourah has since become the main coastal town.

It is also a fishing village. We visited the busy Tadjourah fish market early one morning. The principal eating fish here is like halibut, though flaky whitefish seemed to be the main offer across the gulf at Djibouti city.

But the legacy of the French has encouraged more visitors to Tadjourah than the fish. At independence in 1977, the French left behind their colonial seaside houses here.

Those have drawn the moneyed class of the capital, as well as tourists, to the town by ferry, especially on weekends and holidays.

From here they can enjoy the many exquisite, quiet beaches between the two towns, backed by picturesque mountains with endemic wildlife and fringed by a surprisingly rich reef of lovely coral and multi-colored fish. We surely did.

If they don’t have a home here, high end tourists opt for the beach at Sable Blanc (“white sands”), the only beachfront with a modest resort. By contrast, a short drive away at Raissali you can rough it, sleeping in open thatched huts on the beach, with almost no one to interrupt your peace or your view. And the snorkeling here is surprisingly rich with clear waters and glittering fish of all sorts.

Coming here also gives access to the splendid, inviting hills in the interior. Deep in the back from the bay, they rise – riven by desert and forested canyons – to about 1700 meters (over a mile). That’s where we enjoyed camping and hiking in the Forest of Day (see post).

In addition to wildlife, they can find more domesticated denizens of the desert hills here. We frequently saw small caravans of camels laden with goods following ancient trade routes in Djibouti and Eritrea.

We didn’t know at the time we visited Sable Blanc to snorkel that the US Ambassador was also here, though the presence of many police near the beach might have alerted us.  We just happened to meet him the next day at a Tadjourah inn, after overhearing enough of a phone conversation to realize who was. He offered us any kind of assistance we might need, but we were set to fly out the next day. We told him we would have appreciated an invite to the next state dinner. He noted that – as taxpayers – at least we were paying for it.

We took the two hour car and passenger ferry from Tadjourah to the capital as an alternative to driving about four hours.

We didn’t really save any time, because we had to queue for the boat long before it left. But it was a pleasant chance to enjoy the sea air as we crossed the Red Sea – and avoid uneven roads or traffic. The passengers were mostly Djiboutians, young and old, some of whom brought goats on board with them, which you can see tied to the rails. The ship was a gift from Japan.