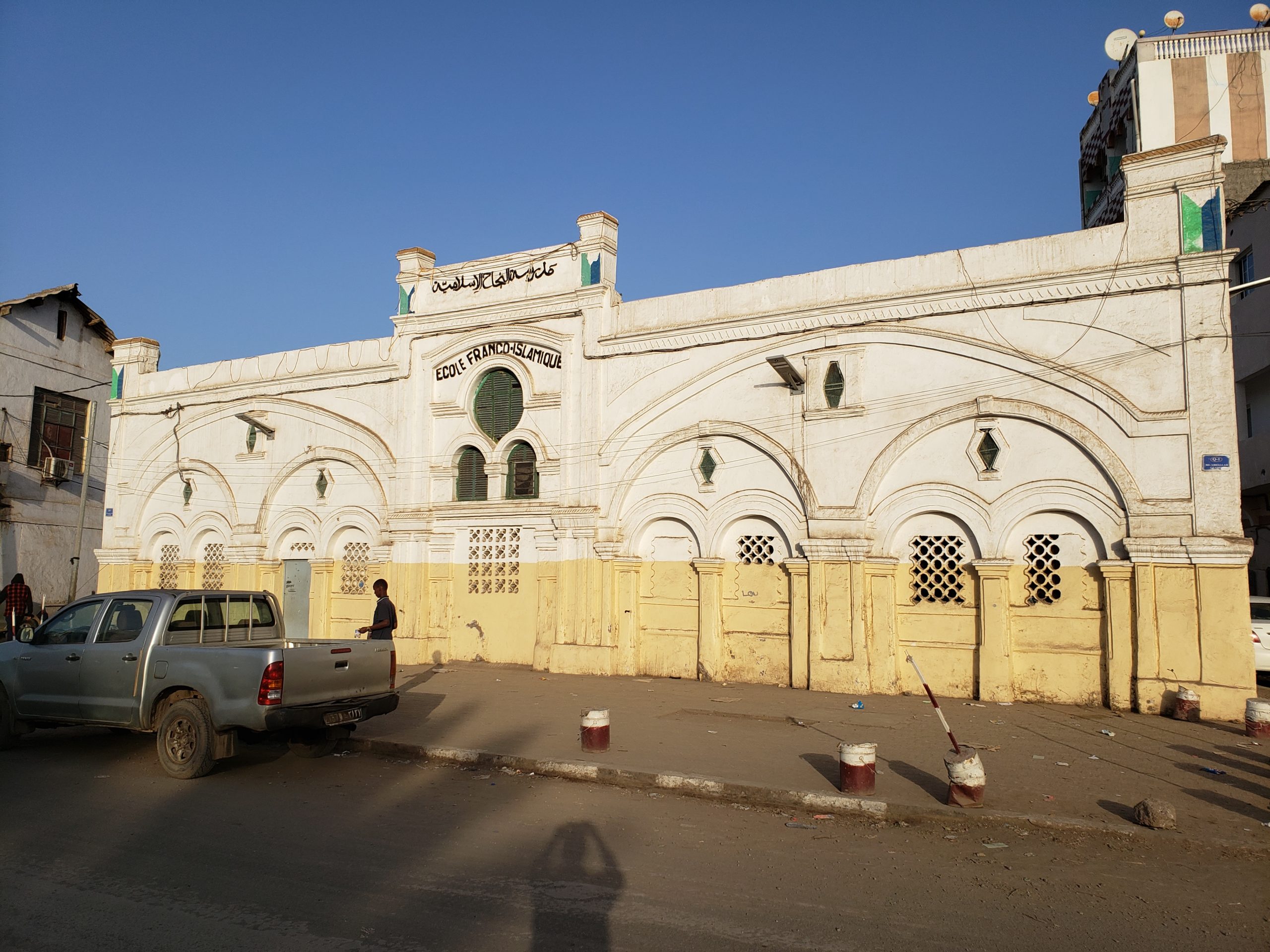 Djibouti City, the country’s capital, occupies a long peninsula with a history of split personalities.

When the French made it their capital at the end of the 19th century (as French Somaliland), the town maintained a typical colonial separation of locals from colonizers. Funded by thriving port operations at the northern tip, the French built mansions and ornate buildings near the port, and isolated the largely Arabic population in the narrow streets of the “African Quarter” farther south.

Now independence and commercialism has shaped the capital in a different way. At the northern tip, along with a sparkling grand mosque and the posh Kempinski hotel, the still vital commercial port includes extensive shipping operations and goods warehousing. We could see all this when we arrived at the port by ferry from across the Gulf of Tadjoura, which is a bit of water at the junction of the Gulf of Aden and the Red Sea.

The Chinese conduct their own shipping activity here as well.  Nearby, a host of sleek commercial and governmental structures, funded by the mercantile activity, occupy the rest of the northern sector. One example is the National Assembly building in modern sandstone which we saw gleaming in the ebbing light.  This sector is serviced by large modern supermarkets and a well-stocked liquor emporium.

Meanwhile, Djibouti’s strategic location across from the Arabian Peninsula and at the lower corner of the Red Sea has already attracted non-commercial air bases for the US and soon perhaps the Russians.

Local Djiboutians now occupy both the old French and Arab quarters – which are still divided (or is that spanned?) by a lively, noisy plaza that acts as the bus depot (to the right of the photo below) and busy produce market.

One culturally interesting building in this junction is the French Islamic school, bridging the French and Arab Quarters since long past.

The French Quarter is now the tourist haven, with many mainstream hotels, restaurants and the fine old arcaded buildings to see.

In this quarter, one standout building is this elegant French structure, which nods to Moorish architecture in a central plaza.

Most of the streets in this quarter have resisted any modernization or urban renewal, retaining their elegance from colonial times. Toward the back part of this street was the Jewish Synagogue in the old days.

Overall, the wealth of the port has also kept the buildings of the French Quarter in pretty good shape. However, disrepair often characterizes the Arab Quarter, as in this building at the transition zone. The colors around the city are often muted, like those of the surrounding desert, but some painted surfaces can be quite vivid.

The Arab Quarter, by contrast, is a bustling souk of narrow streets, stalls and shops, with sweets and colorful clothing, mobile phone supplies and all else on jumbled offer. In the souk, all manner of goods are for sale as well as services such as garment sewing and medicinal herb healing.

Even during our short stay, we found some places to return in the Arab Quarter. One was a sweet shop (with a blazing neon storefront) that offered the most delectable and surprisingly unsugary items on offer. They let us sample as much as we bought.

The other place – Chez Youssouf – reputedly offered the best grilled fish platter in town. The plates heaping with the whole fish certainly looked amazing. We are vegetarian, but could enjoy its fresh baked flatbread, cooked quickly by this master chef like Indian naan in a cylindrical oven. The hot bread, dribbled with honey, was heavenly.

Finally, farther south of the Arab Quarter, those made wealthy by all the commercial activity at the northern tip have created another enclave. There large houses and estates line wide, quiet streets, with the residents served by resources for the wealthy, like the expansive Casino market and mall.