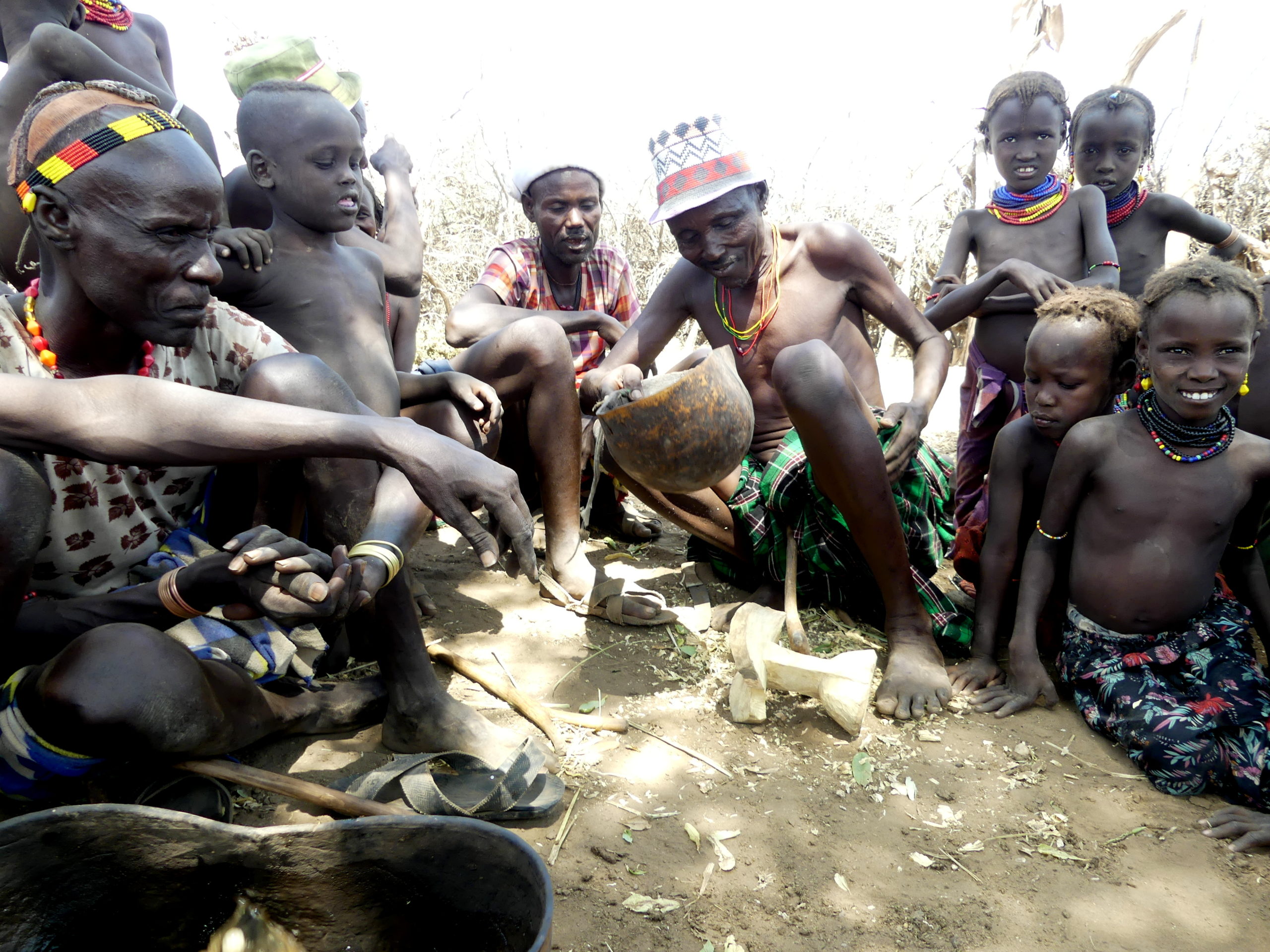 Of the 80 or so tribes that live in the Ethiopian countryside, those in the far south – the Oromia region that overlaps Kenya – are both distant from the highlands capital and often remote from modern life and norms.

When the different tribal people gather, as on market days, the variety of dress and adornment is remarkable.

These women, gathered at a local southern town, demonstrate various traditional hairstyles, most of which use a kind of butter mixed with red clay in the braiding. Men also show off different styles depending on their status in their tribes.

The afternoon is the socializing time on market day as huge tribal groups sit under the shade available and…well, drink local beer in plenty. It’s the time to catch up on news and gossip, as well as roam about looking for a possible marriage mate for the future. Some of them looked at us as interlopers; others offered us food and drink.

Some of the southern tribes have long ago turned to farming, living in permanent dwellings often of brick or stone, and have regular contact with outsiders and markets. Others are nomadic peoples who still wander the plains for vegetation to sustain their goats and cattle, in rhythm with the ebb and flow of the life-giving Oro River. It seemed odd to us, but only recently have the nomadic peoples used those plains to grow a few crops as well.

The lives of both the nomadic and pastoral tribes depend on the Oro for their sustenance. Here, a villager poles across the river toward a nomadic village of low slung, portable huts. These are constructed of large vertical sticks with tin or cloth covering, easily disassembled and carried off.

Whether pastoral or nomadic, this is a hard life, one whose customs often include challenging and painful rites.

We had the chance to visit one such village of the Dassenetch tribe, a remote one at Ethiopia’s border with Kenya that has had little contact with outsiders – and apparently no white-skinned people.

When we arrived at the Dassenetch village, to a hubbub of interest, we first crawled through a low opening into one of the dirt-floored homes, where a young mother prepared tea as her naked 2 year old nibbled porridge with a wood spoon, and two village men joined us. The bare interior contained mats for sleeping and, prominently, saddles for donkeys to carry the house once disassembled.

Emerging from the hut, like aliens dropped down from some other world, we elicited a wide range of emotions from the 40 or so villagers who had gathered around, especially the many children: surprise, delight, daring, uncertainty, fear, wonder, curiosity. A few youngsters stroked our arms to see if paint rubbed off.

Our own curiosity was satisfied by socializing, not gawking, as we sat for a few hours with the residents in the cool shade of a grand tree in the middle of the village,

As we sat down, one of the elders deliberately chipped away at a chunk of hard wood to make a small stool. The stools, they told us, were the only permanent furniture for the villagers, one that every person carried with them on their travels. It also does secondary duty as a pillow.

They asked us if we wanted to try forming this one, but we demurred as chipping away with the sharp knife seemed a bit hazardous for the unskilled. Wisely, the elder approved our choice, saying that he would be just as bad at taking photos with our camera as we would be in making a stool.

Soon the group included not just a few elders, but young chiefs, bare-breasted women of all ages and the many children. We shared a hot tea cooled by sloshing it in a large gourd and temperature-tested by an elder before passing it on to guests. We talked, with an interpreter, learning a bit about their ways and telling them of our own strange lifestyle.

Then for fun, as you can see in this short video, we invited those gathered around to see themselves in the camera screen. Dassenetch village children and elders alike reacted with great delight and astonishment when they saw their own images.

This was a far different experience from the typical tourist visit to supposedly see the lifestyle of native tribes and learn of their customs. The reality, all too often as we know, is a contrived interaction where you are steered into a typical dwelling, are brief on the customs, wander briefly around, are assailed by vendors selling handicrafts, and pay for taking photos. Or just feel awkward doing it. And rightly so, as much as the fees sustain life in the village, tribal villagers resent feeling like zoo animals as much as you would.

Pain and humiliation, we observed, are often in their lives, such as the whipping inflicted on a new wife, as a recognition of her submission. In the shade of the village tree, we observed the healed backs of some of the women gathered around us. We were introduced to a young warrior, who had either chased away or killed poachers. His reward was a kind of tattooing, an array of rectangular scars across his torso made by applying a hot metal brand. A similar method of tattooing for decorative purposes was common.

We had previously heard about other rough rites such as the grand initiation ceremony for men of southern tribes like the Hamer, who prove their manhood – or not – by stepping repeatedly across the tops of, say, a dozen cattle herded by friends. And how the backs of his willing sisters are then whipped forcefully in a painful acknowledgment of his feat. In the Dassenetch tribe, moreover, female circumcision is still practiced. In others, men are circumcised at puberty. The Mursi tribe still approves of the distorting lip plates for its women.

As we learned later from two excellent ethnographic museums, the southern Ethiopian tribes share some rites to celebrate adulthood, marriage, birth and death. For example, custom leads many of them to adopt certain hair styles and colors to convey community standing, marital status and so on. But the tribes (and even age groups within a tribe) plainly differ in their use of the more primitive practices – like those painful ones of the Dassenetch, Hamer, and Mursi tribes. What are revered practices for some peoples seem as barbaric to other tribal members as to us.

Some villages are more prepared for tourist visits, such as the reputedly 600 year old Konso village we visited as well – but in more typical fashion. Locals there have decided to make their village a show place for pre-arranged groups. And they set out handicrafts to sell while offering to sell you the right to take their photos. Nonetheless learning about this pastoral tribe was intriguing.

The Konso people build a permanent village because they depend more on crop farming than grazing cattle. Surrounded by steep hills, they have long prepared and maintained terraces along the hillsides for planting.

Their villages start with a tight group of conical huts enclosed by stone-stacked walls. The village grows by adding other walls in concentric circles, some of which rise 5 meters (or yards) in height. Among their rituals are the practice of sexual abstinence by the men for two years after a child is born, when they move into the village’s communal dwellings – a different kind of birth control.

The founder of a Konso household is typically honored by a traditional memorial – or waka. The man in the center is flanked by wife 1 on his right and wife 2 on the left, with the other figures representing victories he has made in battle or hunting, like the leopard at his feet.

Many tribes still are animist in their beliefs, seeing the divine in all of nature. Stories, for example, center on the traits of animals such as clever monkey, selfish baboon, and so on.

Konso villagers gather for ceremonies at the large central plaza of the original village, always at the center of the residential circles. There a truth stone acts as a place of judgment in case of disputes. Another stone, the 30 kilogram marriage stone (at the base of the pole below), awaits worthy husbands-to-be who are able to carry it about.

This set of tree limbs comprise the generation pole, a symbol of the collective strength of the village: every 18 years, a new generation sets a pole among the others, some of which have rotted over time. We counted 20 poles still clustered together, representing 360 years that the village has lasted. We were told this village probably goes back another 200 to 300 years before that.

A teen-aged member of the nomadic Hamer tribe – the tribe that practices the bull jumping ritual and related whippings – here decorated in traditional body painting.

Two young boys from the Hamer tribe were tending dozens of goats in a dry river valley as we walked through it after we passed through a quiet Hamer village. Even at their age, they were adorned with typical necklaces and bracelets. One was chewing on sugar cane for some energy, while the other eagerly demonstrated for us the uses of an inedible fruit we found on the local trees. Each of them carried a set of small spears for hunting, as needed. Developing that skill begins early in the tribe.

Whether with young or old, we always felt an honored guest among these tribal villagers.