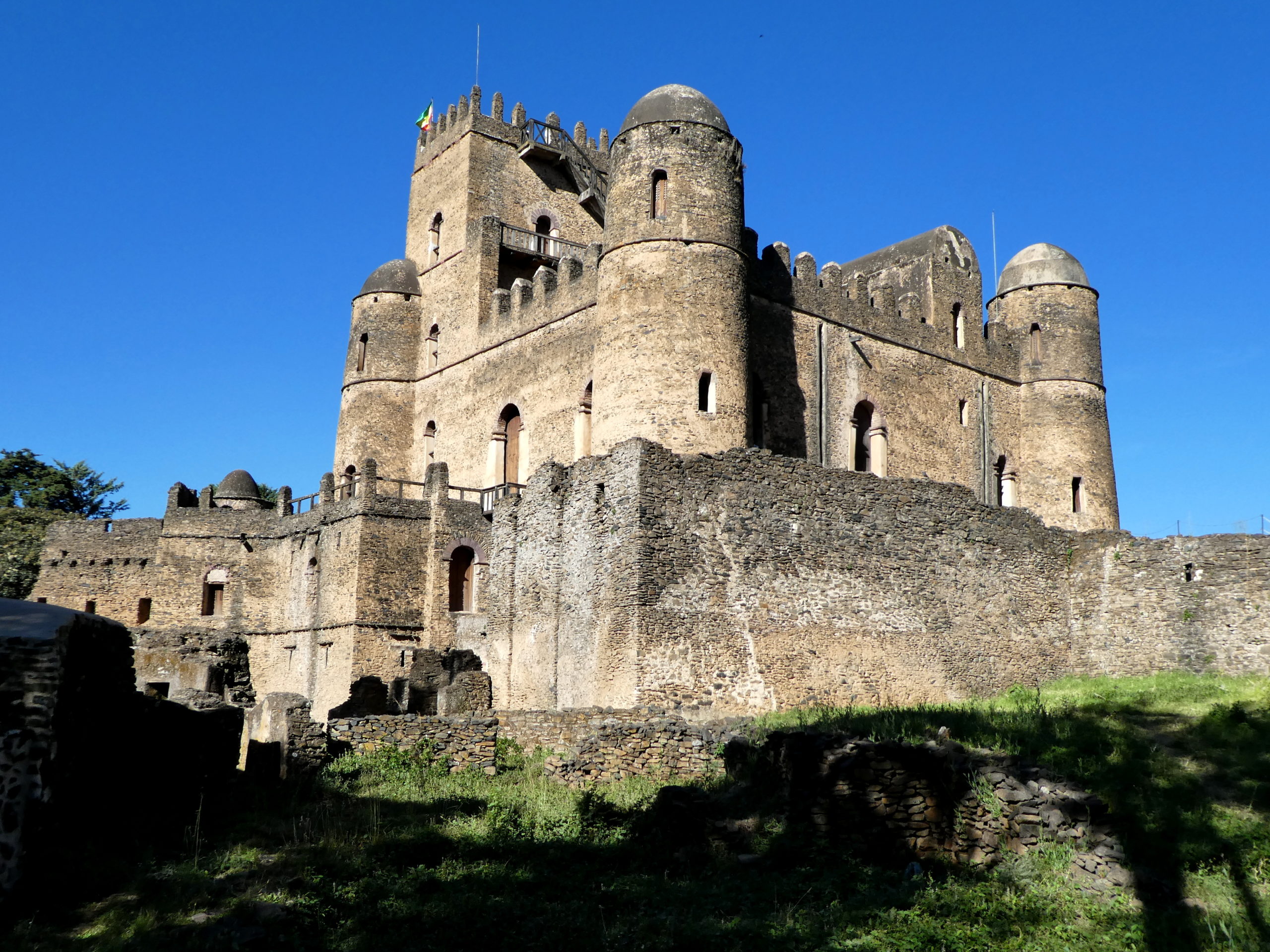 The highlands of northern Ethiopia were the seat of empire in the Horn of Africa for nearly 3000 years, a crossroads for many cultures and far-flung trade routes. And the reputed home of the Ark of the Covenant! The impressive record in stone from the early empires can still be found today in the closely located towns of Yeha, Axum and Gondar.

The oldest remains are in Yeha, where a powerful religious and administrative center for the Sabaean culture arose. Two main buildings from the 7th century BC have survived. One housed the administrative offices which supervised the extensive trade through the area, and it is now undergoing repair and reconstruction.  The other is the imposing Great Temple of Yeha.

The Great Temple of Yeha was a “pagan” temple in a Yemenite style for the Sabaeans, a mix of South Arabia and Tigrayan (Ethiopian) people. It is a masterpiece of limestone brick construction. The roof, which was also stone, sat atop walls rising 14 meters (about 50 feet) high. It collapsed inwards at some point.

Studying what remained, we marveled at the attention to structural detail. The meticulously cut stone bricks were laid precisely on each other, with barely any gaps, starting from the corners where the largest pieces anchored the structure and then carefully levelled in-between the corners along the slight hillside. Smaller blocks filled in as needed, especially toward the middle of the wall.

The interior of the Great Temple of Yeha still reveals the religious practice of the Sabaeans.  Early on, the priestly space toward the back wall was divided into three sections for different rituals: purification by washing, sacrifice of animals and prayer. It was unclear, but the window in the shape of a cross was either fortuitous or carved after the building’s conversion to a Christian church in the middle of the 1st millennium.

An ancient frieze, now inset in a 16th century monastic church still active at Yeha, shows the endemic Walia ibex, which had practical as well as religious significance for the Sabaeans.

The successor Axumite Empire dominated the region in the first millennium AD with effective leadership, paired with trading and manufacturing wealth. The Axumite became a Christian nation in the 4th century, fostering the Coptic Christian church still strong today. The Axumites lost power after several more centuries due to conflicts with neighboring Muslim empires and the shift of trade routes to the north. Almost nothing remains to be seen of their palaces and temples. Only the impressive, UNESCO-designated tombs of the Axumite leaders, marked by sky-scraping stele, reveal the power they wielded.

Overview of the cemetery of the kings in Axum and the various stele marking their underground tombs. The tallest of these is 33 meters (110 feet). It was removed by the Italians during their 20th century occupation of the country, but eventually returned to the site. Another tall one lies broken near it.

The burial ground of the Axumite kings occupies a gradually sloped hill with various types of stele atop the crypts where many royals rested.

The 4th century AD Mausoleum of the Royals is the most impressive of the tombs open to visitors at Axum.

Down a dozen steps, a solid portal made of large stone pieces opens to this hallway with another portal, now collapsed at the far end. The passageway is fed with air by three shafts from the surface. Ten burial chambers line the sides, each of which had been sealed up to protect it. The practical and religious items placed within the graves provided a wealth of information and museum artifacts.

This tall stele at Axum is the most richly decorated, but it tumbled over because of shifting ground. That’s why others are tethered with support wires.

The regular patterns carved into the stele have provided clues to archeologists of the construction methods used to build other long-gone Axumite structures like palaces. The entire column – with ascending doorways and windows – offers a template for a multi-story building. Lines of circles show where cross-timbers would be used to support a structure.

One of the tallest of the stele at 30 meters (100 feet). It was removed by the Italians during their 20th century occupation of the country, but eventually returned to the site. This one also mimicked the construction methods of the Axumites, with ascending doorways as if on multiple stories.

The glibly named Tomb of the False Door at Axum, also dating back to the 4th century, features an impressively constructed platform of large stonework topped by a massive vertical piece into which is carved the image of a doorway, the false door. The opening is the true entrance with a descent of a dozen stairs to a cave-like tomb.

A very different legacy of the Axumites at Axum is the religious treasure they helped preserve – the legendary Ark of the Covenant.

The Ethiopian Coptic Christians believe that the Ark is located at St. Mary’s monastic church across the street from the Axumite tombs. By tradition, copies of the ark are removed from principal churches around the country and displayed in triumph during the most holy celebrations of Epiphany on the 19 or 20th of January. Only priests are allowed into the building where the true ark reportedly sits, so a voluminous new dome of a church fills a plaza nearby for pilgrims to visit and pray.

As the story goes, the Biblical visit of the Abyssinian/Ethiopian Queen of Sheba to Solomon, a visit which provoked the ecstatic poem of the Song of Solomon, culminated in a one night liaison between the two. The consequence purportedly was a son called Menelik.

As an adult, he returned to Jerusalem, claiming for his people the Ark that contained the ten commandments. He transported the ark back to his homeland where it was carefully preserved until the Coptic Christians took charge of it.

On the far side of the ark building, a monastery, which only men can visit, trains priests and also offers prayer services. Its walls are adorned with colorful religious stories and figures from the Old and New Testaments, as well as Ethiopian saints.

Fast forward some centuries after the Axumites…

From its origins in the 13th century, the Abyssinian or Ethiopian Empire fitfully grew until it eventually consolidated as the dominant power of the horn of Africa by the early 17th century under Fasiledes. By then the imperial capital was in the highlands city of Gondar (a UNESCO World Heritage site), where successive leaders built palaces within a sprawling royal complex.

Claiming direct lineage to the famous Menelik revered by the Axumites, the kings strengthened and extended the Coptic Christian faith, building an extensive network of churches and monasteries throughout the kingdom. They were generally tolerant of the Muslims who had come here in earlier periods.

Three 19th century emperors – notably the reunifier of the country, Tewodros II – expanded and defended Ethiopia until weakened by conflict with the European powers. In 1896, the emperor’s court abandoned Gondar for a new capital in Addis Ababa.

Here is the last of the palaces erected before the empire moved to Addis. Though some “modern” decorative touches had been added to the windows and doors, the building still looks much like all the others built over the 300 years.

This, and all the other buildings, remained intact, however, until the bombing of Gondar by the British in 1941 during World War 2. Some thirty years later, after 700 years of imperial government, Ethiopia’s last emperor Haile Selassie was overthrown in a 1974 Communist coup.

Despite all this change, many of the impressive stone structures the emperors built still stand grandly. Here is a quick tour of the Gondar complex.

Behind this broken archway once stood the grand entrance to Gondar’s imperial complex, a massive greeting room. The room and the rest of the arch were destroyed during the 1941 bombing. In the background to the left is the palace of one of the queens.

The first and the grandest of the palaces is the one built by Fasiledes in the early 17th century.

The massive towers are imposing, but they were not intended for defensive purposes, as they might have been in medieval times. Rather they served as sites for religious activity by the Coptic Christian priests.

As a synthesizer of various cultures, Fasiledes incorporated Ottoman, Byzantine and Axumite styles into his palace, such as the windows, doors and wood accents. When we visited, the entry room of his palace was stocked with local volunteers playing the royals and attendants under the high wood beam ceiling.

Atop the tall entry staircase and archway of Fasiledes palace, you can see off to the hills beyond. The two buildings on the far right are the crenellated Queen’s palace (right) and the tiered royal library (left).

The rare decoration near the top of the Queen’s palace became the fashionable pattern for women throughout the kingdom. Women still tattoo this pattern around their necks. All the treasures of the library were snatched by the British in 1868 and brought to the British Library, London.

Nearby these buildings loom two of the grandest structures in the royal complex, though damaged by the wartime bombing. Near us is the newer palace of Iyassu the Great from the late 17th to 18th, without a roof now.

Elongated interior of Emperor Bakkafa’s palace from the early 18th century. The local students, dressed in traditional white and red, are there to learn more about the history of the empire and the site.

A ceremonial hall for entertainments and festivities built in the 18th century by King Dawit III (the local spelling of David, father of Solomon).

These grand buildings in Gondar span about 300 years of empire, as many rulers staked their claim by establishing their own palaces. We were struck though how the kings continued to imitate the overall look and style of the original rather than concede to any modern influences.

Not to be missed: the best of wild Zambia