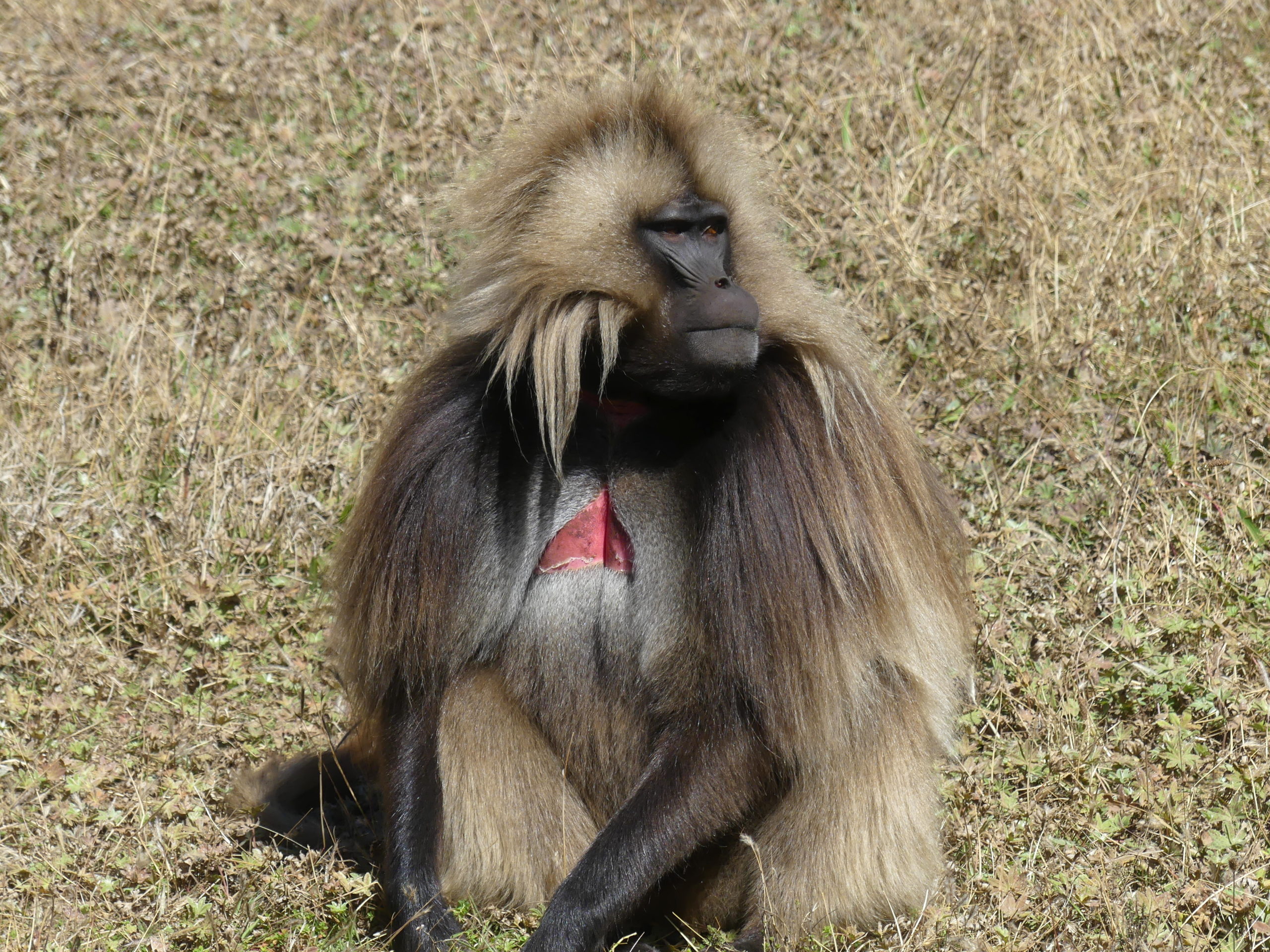 January’s cold nights and warm days at altitudes up to 4000 meters (13500 feet) characterized our trekking experience through these two spectacularly beautiful mountainous regions.

The Tigray mountains in the north of Ethiopia offer two grand delights for hikers like us.

First, richly colored sandstone cliffs that reminded us of the American southwest, but here enclose fertile valleys and farming villages some 400 to 600 meters (1400 to 2000 feet) below the high plateaus of the cliffs.

The glow in the evening cast a spell on us.

We had to make an effort to pay attention to the wildlife instead of the landscape. But they too were enticing, like this Variable Sunbird on an effusion of thistles.

Or the playful rock hyrax This one was curious but unperturbed, at the steep edge of a sandstone cliff.

Or this mating pair of grasshopper-like bugs, whose colors in miniature rivaled the painted landscape around them.

The second delight for us was the network of six community-run guest houses for sleeping (and eating) pleasantly along the hiking trails, each built of the abundant sandstone and graciously managed by villagers nearby.

Our initial guest house was formed of golden sandstone bricks, a lovely color in the evening or the morning, when herders loaded visitors’ gear on their donkeys to follow those trekking to another of the six guest houses.

We had the good fortune to be here on Ethiopian Christmas, January 7th. So we were invited to join the people from the village in celebrating that holy day. Around sunset, we gathered for a traditional meal at this communal guest room at the village chief’s home, with fragrant leaves strewn on the ground.

Within a few hours, a couple of dozen villagers had arrived, arranged themselves around several tables, and enjoyed the food, the free-flowing local beer concoction as well as conversation. Per the custom of sharing, several guests occasionally hand-fed the hosts or other guests. It was all very mellow. Soon a Bluetooth speaker started to play some Ethiopian music, as young boys showed off their dance moves in the middle of the room.

After a few hours, many had left, but those who remained shared bottles of ariki (a local ouzo) and a traditional dessert of hand-made pastry balls. You skewer a ball with a twig gleaned from nearby bushes, then dip the ball into a large pot containing both a fiery hot sauce and a mild chickpea sauce. You decide what level of heat you want.

To reach our second guest house, we descended from the ridges of a sandstone cliff across a number of lower terraces into the valley below. On the way, we passed several colorful formations like this.

We passed a lot of children as we walked between the guest houses, largely diverting themselves while their parents did the farm work. Here two young girls from a village in the valley work on sewing a garment. Most were intensely curious about us, though many visitors follow these same trails. Some boys played soccer. Some girls giggled at us, and dared a few hellos.

Other children were tending farm animals, even at a young age. One girl of maybe eight years guided a small troup of sheep along the trail, all by herself.

Also, during our walk through the village, massive agave plants lined many pathways. Doves seemed to prefer nesting in these, but they were skittish. They typically escaped noisily from the agave as we passed.

Our second community guest house also shone with the golden light of morning across a valley. We stayed in a large room in the building on the right, with hard but comfortable beds. A kitchen and dining area occupies a third structure, with quite a high quality of food delivered by cooks from the local village. The building on the left of the photo accommodates other visitors.

Tucked between the two buildings, though hidden from sight, is the “shower” and drop toilet. The shower is just an empty chamber where you can take hot water supplied by the guest house staff and wash yourself down. The pit toilet was decked out with a wooden seat on a pedestal, and kept meticulously clean.

For colorful vistas and welcoming hosts, our days in the Tigray Mountains were incomparable.

The Simien Mountains comprise one of the most dramatic landscapes in Ethiopia – or perhaps the world – plus a host of endemic species of flora and fauna.

The vistas from cliff edges let you peer into drop-offs of thousands of meters.

However, unlike Tigray, we roughed it in a small tent, an experience apparently preferable to the blockhouses at some of the sites.

Many campgrounds are just off the only road, a rough one, through the national park, so a vehicle can carry your gear from spot to spot. Our group’s stuff is on the adjacent tarp. The round hut in the background is one of the cookhouses.

Around meal time, there was always a bustle in the round cookhouse at the campground as several cooks for the camping groups shared the space.

The pro tip here is to bring your own cook with you, if you can arrange it. We benefited from one of the best local guys (at the burner on the right), who prepared several four course dinner meals in the wild, packed lunches, and various options for sit-down breakfast – on just a couple of gas burners. The food was the best we had eaten in Ethiopia.

Though the days are very pleasant in temperature this time of year, the nights quickly turn cold – below freezing. Before burrowing into our sleeping bags, we spent much of our evenings here in the cookhouse with a warming fire in its center.

Among the flora and fauna…

The giant lobelia are superbly adapted in numerous ways to the range of temperatures and water conditions – extremes of hot, cold, dry – in the highlands of Ethiopia. The rosette, the part above ground, is just the visible part of a network running underground. Each rosette grows a spiky flower several meters high decked with hundreds of thousands of seeds before it dies out.

Ethiopia’s endemic Gelada baboons are misnamed, for they are truly monkeys. We saw huge troupes of them close at hand here and in the Tigray mountains, for they are indifferent to people as they forage for seeds and grains on the ground. In addition to their impressive fur, they have bright red chests. That’s why they are popularly known as “bleeding heart monkeys.”

A highly prized sight in the Simiens are the endemic Walia ibex, which are very adept climbers on mountain ledges. This one ambled by us on a narrow ledge.

One evening, at a vertiginous cliff edge, we watched an ibex family of three graze in the last rays of sunlight on a hanging meadow below us.

An endemic bird, the Abyssinian roller, one of the most brilliant of birds.

Local wasp and thistle, demonstrating that even the small things around the Simiens can be attractive.

The endemic, noisy and strikingly beaked thick billed raven. As scavengers, they appear quite often at the campgrounds.

These bright yellow flowers were everywhere at high altitudes. They were a favorite flower of the sunbirds…and a beauty to the eye as well.

And last but not least, an Erckels francolin. Francolins, which seem to be distant cousins to chickens, are generally quite shy, fleeing quickly into the underbrush. We were very pleased to capture this one photographically before he disappeared.