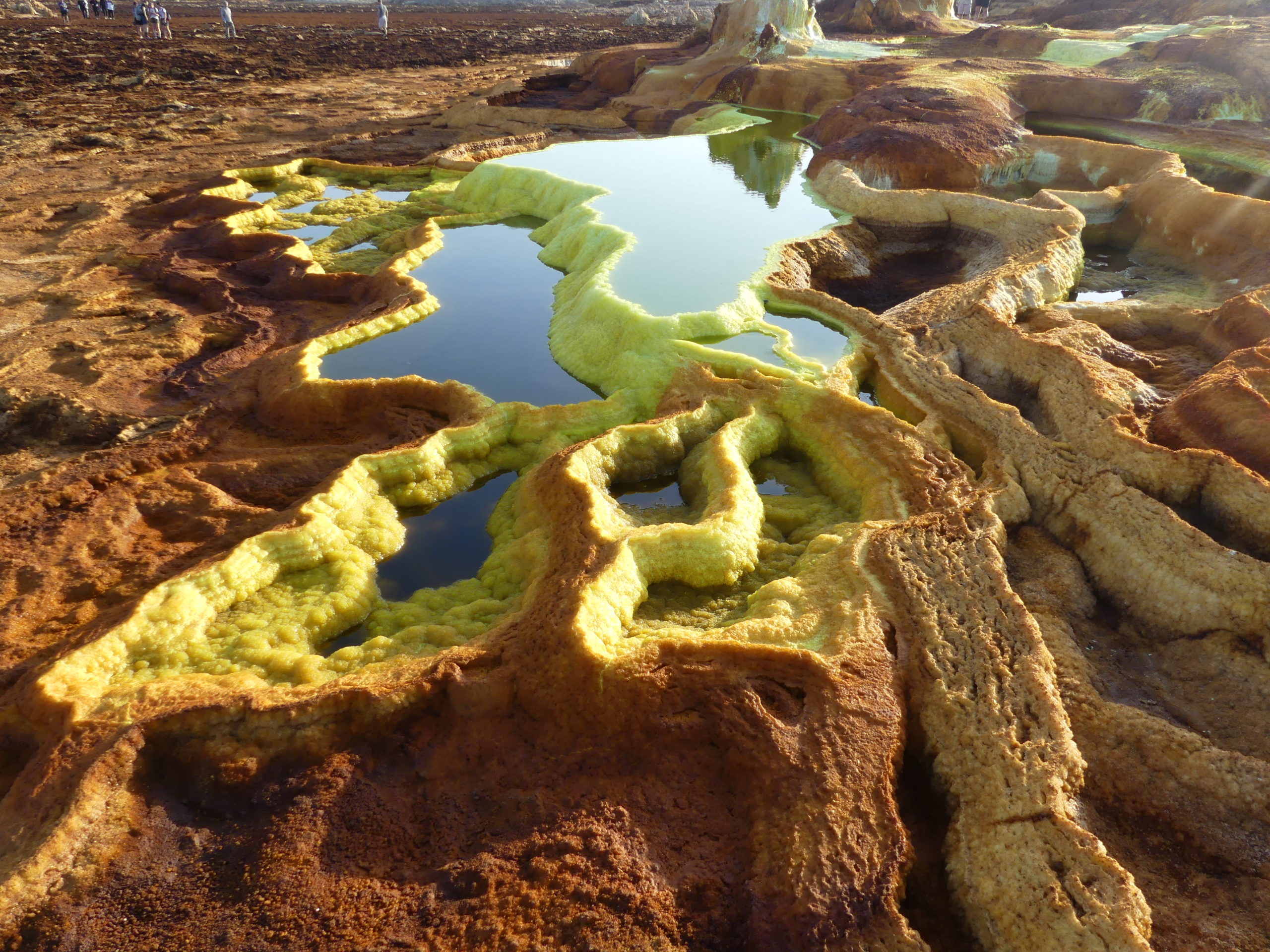 Perhaps, we thought, as we caravanned for three days through the northern Afar region of Ethiopia, the intense religiosity of Coptic Christians here has been spurred by knowledge of the fiery, sulfurous features of the area around the Danakil Depression, one of the lowest points on earth.

In Afar, we faced three levels of inferno.

At the most hellish, we climbed for two hours on a hot, windless night, along a trail barely lit by a crescent moon, to stare into the crater of Erte Ale, a still active volcano among many along the split of tectonic plates in East Africa’s Rift Valley.

Around midnight, we tread lightly across the crusty outer crater left by old eruptions, masked to filter the ashy, sulfurous air. At the lip of the inner crater, when the steam did not obscure the dark surface, we peered into its hot cauldron. Bursts of gas and fire from several fissures lit up the surface within.

This video shows the fiery spit closest to us and the most interesting, as you can tell from the oohs and aahs of our small group (courtesy of Kebede Dache, our guide and friend).

Then, mad possibly, we slept in the open for a few hours just beyond the lip of that old crater, occasionally coughing on the gas wafting out of the bubbling volcano. In the early morning, steam still glowed red from inside it (courtesy of Marcos Ruiz).

Before the volcano experience, we crunched along the salt landscape of the Danikil Depression, whose pans stretch to the hilly horizon, often rippled through by veins.

This section dips to 125 meters BELOW sea level. And it is the hottest spot on earth, with a temperature that can exceed 50C (120+ F) in summer, when even local tribes flee to higher ground. It was certainly hot enough for us while we were there in the “cool” season.

In some spots, mountains of salt rested on the salt plain like islands, with colorful veins of various minerals. We couldn’t help taste-testing the surface to make sure we were actually climbing upon salts rather than rock.

In other spots, canyons of salt emerged abruptly and mysteriously from the flat pans. You could drive among these, or walk if the heat was not too much for you.

Where water collected, we tiptoed, flexed and reflected across shallow salt lakes in the scorching heat of the Danakil.

In the ebbing light of day, at least, the air began to cool quickly.

Our third experience of hell on earth was perhaps the most seductive.

At Dallol, we trod carefully amid spillways of sulfur and minerals, around hillocks where effusive mineral-rich liquids and gasses bubble to the surface.

Dallol had to be one of the most richly colored pathways to hell on earth.

Here, a now dried area of popcorn-decked veins where sulfurous liquid once bubbled.

There, another dried area of eerie toadstools.

Here, within the varied colors left by sulfurous waters, a striated mound, topped by a hot pot of bubbling liquid spilling over it.

There, several mounds emitting hot steam from their tops, like mini-volcanoes.

Everywhere…Sulfur pools filled by the waters bubbling from deep below.

If Coptic priests needed to point to earthly signs (and tempting attractions) that portend a sinner’s future, here they all were. But, dare we say, amidst all these whiffs of hell, we rather savored the Afar’s heavenly desert landscape?