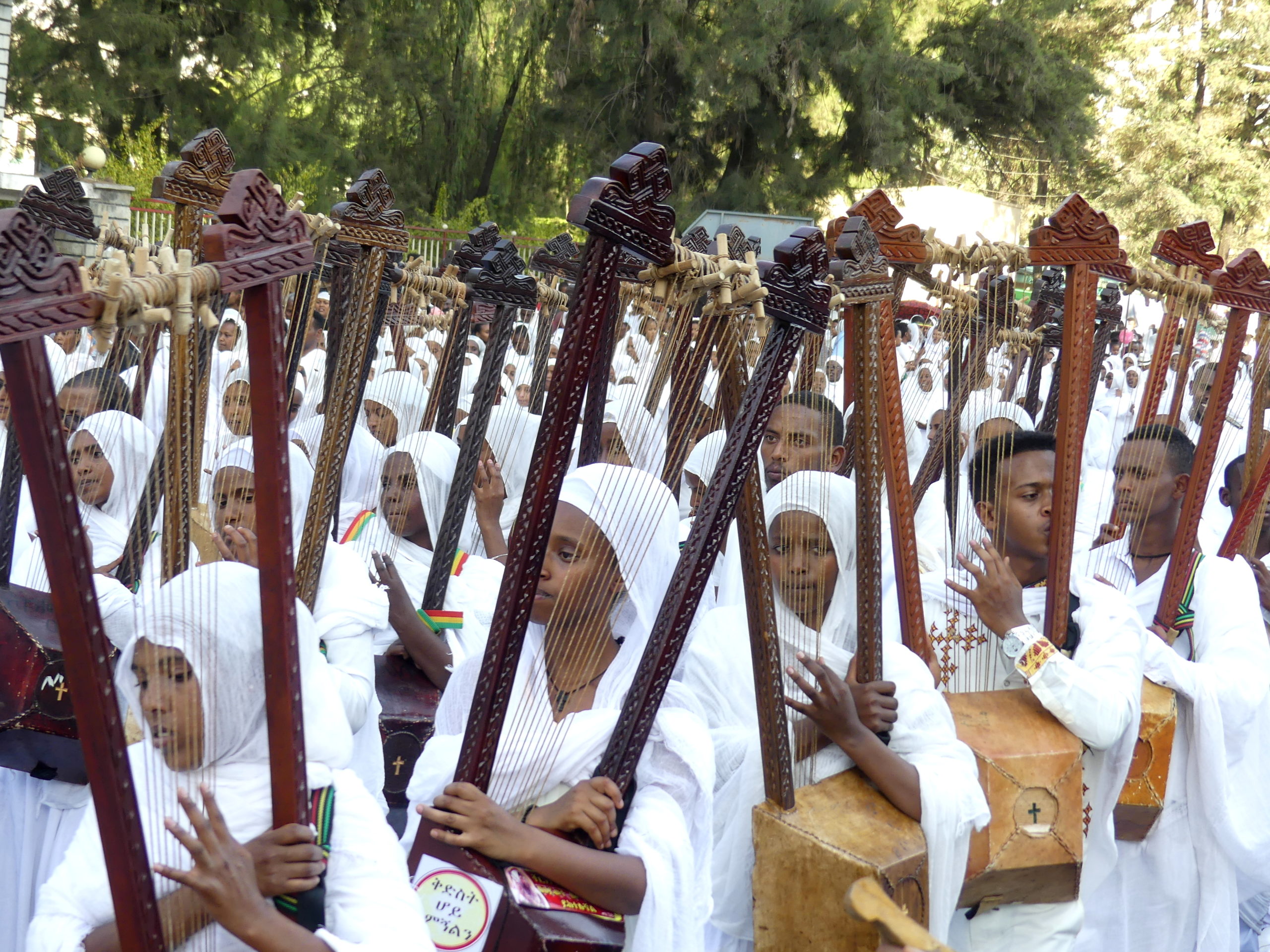 The ululating chant of the Coptic Christian priests begins early in the hilltop city of Lalibela, amplified through loudspeakers and echoing off the adjacent hills. Later services draw the devoted to the eleven churches carved from solid rock in the reign of King Lalibela during the 12th-13th c. This is the holiest of sites for the Ethiopian church, drawing 100,000 pilgrims for Ethiopian Christmas and many other pious, penitents and sinners throughout the year. And it is a UNESCO World Heritage site.

Pilgrims meander among the churches or await the opportunity to pray. This group had gathered on church steps across from the Bete Maryam church, anticipating the next service.

Lalibela was one of the four main kings of the long ruling Ethiopian empire. His name meant “honey eater,” for legend says he was born amid the beehives and nursed on honey, and because of the sweet promise of eternal life his city offers. As the story goes, during Lalibela’s visit to a place where tribal people ate their enemies, he urged them to purge that sin by traveling to his city. Pilgrims have continued to do so for nearly a thousand years.

To make his city holy, Lalibela dedicated himself to the cutting of those eleven churches out of the basalt and tufa within the hilltops of his namesake city – honoring the most revered saints and angels of the Christian church (Mary, Peter, Raphael, Gabriel and so on) – and connected by a confusing network of passages and tunnels.

As this interior shows, the churches are generally austere, with simple decoration dominated by crosses from many Christian traditions. This is within one of the largest, the Bete Medhane Alem. Its exterior columns are also massive and rectangular. Mostly original, they too were carved from the surrounding stone as support and as echoes of Roman temples.

Bete Maryam, St. Mary’s Church, is a small jewel from the outside, with a set of portals integrated into the carved building. All was cut from the mountain side in place. The protective canopy was installed with UNESCO World Heritage funds.

Maryam’s carved portals and painted interior make it one of the most artistic of the churches. Some paintings dating back to the 13th and 14th century.

From this precipitous viewpoint, the imposing and dramatically set church of St. George (the one with a large cross carved into the top) demonstrates both the exceptional artistry required to carve these churches as well as the devotional labor brought to the task.

The impressive three-tiered exterior of the Bete Amanuel church in the spiritual Jerusalem group has a strong linear appearance making it look even larger than it is. It is one of the most impressive of all the churches.

The inset crosses in the lower tier are conventional, but the middle tier “windows” are Axumite crosses. The Axumite empire of the Abyssinians/Ethiopians dominated a vast region from nearby in the first millennium, and converted to Christianity in the 4th century.

Bete Amanuel’s interior echoes the strong horizontal lines and jut-outs of the exterior.

Another in the spiritual Jerusalem group is, no not Petra, but the Bete Abba Libanos church. Pretty much a cave inside, its façade is craftily carved from the surrounding rock.

Father Libanos was one of the early missionaries from Syria to bring Christianity to Ethiopia. Another sturdy canopy protects it from weather.

Four elegantly carved statues of saints constitute an untypical set of guardians at Lalibela for the chapel of Bete Golgotha, another of the New Jerusalem churches. As often happens in the holiest of Coptic sites, women are not allowed.

Beneath a massive stone slab here, it is said, King Lalibela is buried. The slab cannot be moved, though a hole bored into the stone allows pilgrims to gather miracle-producing dust from the grave within.

Symbolic touches are everywhere at Lalibela, especially in the spiritual, New Testament set of churches.

A principal approach into the spiritual area, for example, is this double set of narrow archways, the eye of the needle through which the wealthy cannot pass. We didn’t think they were wide enough for a camel to pass through them, but we could, on the way out of the new Jerusalem group.

In another part of spiritual Jerusalem, a downward pitched, light-less 70 meter long tunnel takes a visitor on a transit through hell to heaven by way of the church.

After emerging from the tunnel, one climbs a short stair to cross a stone bridge toward this vision of heaven – the Bete Gabriel-Rufael church (dedicated to the protecting angels Gabriel and Raphael). Though solid rock, it seems to float in the space carved out for it.

Our original plan was to celebrate the holiest day for Ethiopian Coptic Christians with countless pilgrims at the holiest of Coptic cities, Lalibella.

When we saw the throngs arriving there during the week before, however, we were just as happy our schedule had changed. We later learned from a fellow visitor that we were also lucky because a viewing platform collapsed at one point, killing a few people and injuring many.

We felt privileged enough to share in the boisterous festivities at the southern city of Hawassa and several villages nearby. The Coptic Epiphany (or Timket in Amharic) celebrates the baptism of Jesus as the revelation of his Messianic divinity. Western Christians, in contrast, more quietly celebrate Epiphany as the moment when Jesus was revealed to the Magi as divine.

There were plenty of people rejoicing in Hawassa, most fully feeling the holy spirit.

As our short video shows, we joined up with more than 100,000 people – dressed in traditional pious white with colorful accents – as they joyously walked down the long Hawassa boulevard.

In traditional fashion – with trumpets and drums, with clapping and singing, with leaping Davidic dances – the townspeople accompanied a simulacrum of the revered ark of the covenant. Here in Hawassa, the ark’s two hour journey took it from its home church in town to another church beside the town’s huge lake.

Thousands of the devoted and joyful passed us during the march before the covenant arrived, all in robes of white, but with bright and colorful trimmings.

On the other side of the wide boulevard, many more attendees flowed past us to keep pace with the singers and reach the second church on the lake, the destination of the ark.

It often seemed that orders and ranks of angels were arrayed before us during the procession, just like depictions of heaven in medieval paintings, and no more so than with this cadre playing traditional Ethiopian stringed instruments as they passed.

The big moment, the passing of the ark of the covenant, was one we didn’t quite understand. We expected that the canopy behind these strangely topped priests sheltered a model of the ark, some kind of box. It didn’t. Instead, we learned, each of these priests carried a small container with the ten commandments inside.

The heart of the matter…a platform passes with a statue of the baptism of Christ by John at the Jordan River, heralded by two lively, horn-blowing Gabriels. This is the moment celebrated by the procession when Christ is revealed as divine and it’s the event that is re-enacted the next day in the baptism of all the attendant Christians.

Through the night, after the ark moved between churches, many people prayed and priests chanted, while others continued their celebrating at the local bars. The next morning at the town’s lake, with more singing and praying, the priests baptized all who attended in renewal of their spiritual commitment. After the baptism, the crowd reversed the procession, with equal fervor, accompanying the ark back to its home church.

We happily witnessed the morning ritual of baptism at several small towns in the region. Here, gathered at a village river representing the River Jordan, the parishioners sing, pray and receive their revitalizing baptism.

Strangely, as two of the very, very few Westerners at the celebrations, we often seemed to attract as much attention as the holy ark itself. We were even interviewed by the regional TV news in Hawassa about our experience.