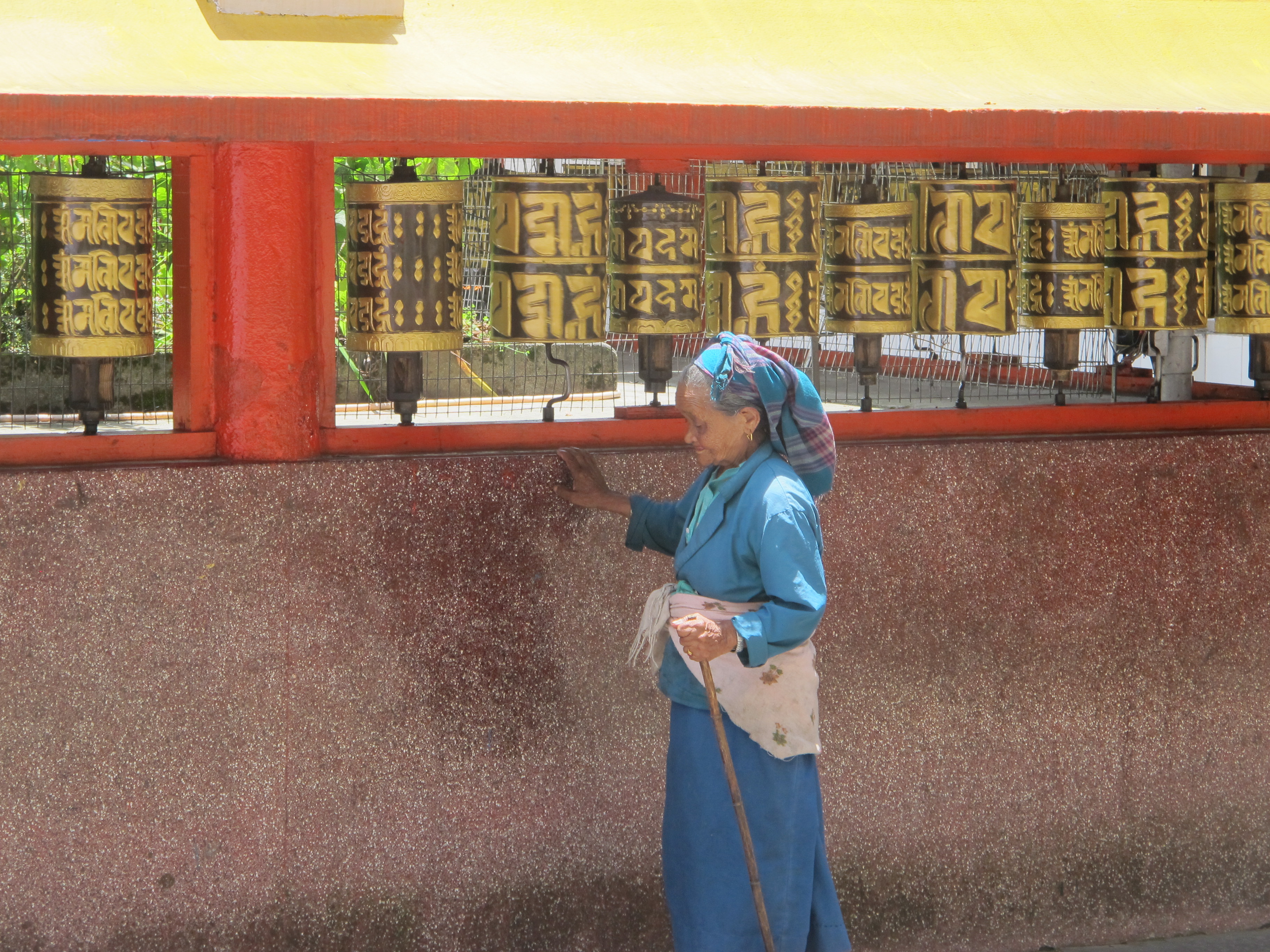 Our post on the geography of Ladakh talked of the grandeur of the valleys and challenge of the mountain passes, the ones that traders between Asia and Europe knew well.

In the valleys around Leh, and across Sikkim, the spiritual landscape – which centers on Tibetan Buddhism – is just as vivid. To underscore its importance, toward the end of our stay, Leh was the gathering place for perhaps a 100,000 pilgrims who traveled here to attend public lectures over a two-week period by the Dalai Lama, the supreme priest of Tibetan Buddhism.

He normally lives in McLeod Ganj, a small town high above Dharamsala, himself a refugee in India from his native Tibet. A short while after we left Ladakh, we visited that busy town, a haven for Punjabis escaping the heat of the plains, for monks to study and pray (or argue with each other noisily and almost violently) at the Dalai Lama’s own monastery, and for westerners who want to mediate or trek in the mountains. He was not yet returned from his travels, but his presence was everywhere in the town – on billboards, in restaurants such as the one where he is photographed eating, and in signs that wish all the refugees might return to Tibet some day.

But, for two weeks, the Dalai Lama was preaching around Leh, with the central action a few kilometers just east of town along a dusty, bumpy roadway that was supposed to be asphalted in time. A massive impromptu meeting space had been prepared from a large field to accommodate the throngs of devout and curious who traveled here for his words on religious, and maybe political matters.

The gathering is called the Kalachakra (literally, the wheel/cycle of life/death, or time), a central precept of Tibetan Buddhism. We were told that he will focus his teaching at the gathering on a central iconographic image of the faith, a tantric union of the many armed and fearsomely demonic blue buddha of compassion with his red consort. This overtly sexual union of time and the timeless among other things is one we have seen repeatedly painted on monastery walls or depicted in statues. It represents a powerful and advanced Tantric pathway to enlightenment.

In addition to the main gathering, others may hear him speak in some of the monasteries we visited, most notably the large one at Likkir to the west of Leh, where it seemed that the village and monastery had built a new three story residence and open meeting space just for his appearance.

Why here? For hundreds of years, borders were more fluid. Even before the many refugees into India from Tibet, including the Dalai Lama, the Tibetan school of Buddhism had a strong hold on the landscape in the form of hilltop monasteries, or gonpas. These would form a circuit for pilgrims to visit as well as places of teaching and prayer for those men and women who chose the monastic life.

They’re not all the same. Though all acknowledge the primacy of the Dalai Lama, each belongs to one of a complex array of sects within the faith, with a well-delineated genealogy of the incarnations of their own sects’ lamas, essentially successive leaders of the sect. Some have just a few resident monks now; others are quite full. The subtle distinctions of belief remained arcane to us.

However, touring nearly a dozen of them demonstrated a lot of commonalities.

Generally, they are tranquil places visited more heavily today by the growing numbers of tourists coming here, rather than nomadic pilgrims.

Though in Sikkim monasteries tend to nestle on flat plateaus high up, most near Leh tumble down from the peaks of hillsides, with the central buildings on top like eagles’ nests and the residences arrayed below. At the top, the core monastic buildings present a visual jigsaw, climbing up steep stairs from the central open plaza, where people gather for the slow-moving, lengthy festival ceremonies.

That’s where you find the du-khang, or main prayer hall for the resident monks, with an entryway decked in colorful painted trim and a wall painted mainly with the four guardians from the four compass directions. All visitors remove their shoes in respect to the holy place, then walk on rectangular tiles of wood slats, worn smooth and shiny by ages of bare feet and slippers.

Inside, past silken fabrics draped from ceiling to floor, and opposite the entrance, there will be an array of statues. Some are buddhas whose mediation value for the devout will vary – compassion, long life, decked in glory (e.g., the radiant maitreya, threatening and fearsome – an alternate form of compassion). Others are statues of the founders and incarnations of the sect, including the often depicted Tsokye Dorje, a mustachioed incarnation of the first Tibetan guru Rinpoche or Padmasambhava.

Shelves on that wall are filled with colorfully boxed prayer sheets for the monks. On the other walls are painted a wide array of buddha incarnations including truly frightening ones, tantric images of gurus or buddhas in sexual union with their metaphoric consorts. Somewhere, typically, the central teaching of the six sectioned wheel of life and death displays images of the pain and potential of existence.

It is a feast, and temptation for the eyes – though intended primarily for religious example and teaching.

The daily prayers seem to vary little from place to place. At the designated prayer times, a monk rings a large gong, like a divine dinner bell, calling the other monks to the du-khang, the main prayer hall. Once inside, each removes a set of loose-leaf Sanskrit prayer texts printed on thick rectangular sheets from the boxes on the shelves. The Sanskrit texts date back millenia, and we’ve seen some of these printed by woodblocks back to the 11th century, preserving wisdom and the right words to speak with God.

The monks sit on flat cushions at long rows of low-lying tables, running from the entrance to the back wall where the statuary sits. They place the prayer sheets in front of them on the tables. A senior monk leads the prayers, reading a short passage, to which the monks responsively chant another passage, while flipping the pages of their prayer books. At times, a drummer thumps out a rhythm on a vertically mounted drum. The rhythm often accelerates to a rapid throb of chanting. Frequent outbursts of bells, short valveless clarinets and long trumpet horns mark a boisterous shift in the prayers, At one gonpa, a set of young monks were directed to the back of the hall to perform seemingly endless obeisances to the Buddha statues in front.

Smaller temples – as well as lesser meeting halls and shrines for private prayer or small groups of monks – often connect by stairways to the plaza or du-khang. These offer similar icons and paintings to contemplate, sometimes darker and more foreboding than the main prayer-hall, sometimes more serene.

The devout bring offerings in the form of food or money which they carefully place with prayer before the statue most appropriate for their spiritual or physical needs. When they enter, they get on their knees and bow their foreheads to the floor, then repeat two more times – just as Catholics will cross and baptize themselves on entering a church.

Other physical forms of prayer appear repeatedly around the monastery. Cylindrical prayer wheels ranging from a third of a meter to several meters tall allow visitors to spin them clockwise and chant a prayer. Long rows of the small ones act like a massive rosary. We saw one stooped woman spinning wheel after wheel, at each of which she said another prayer. Some carry a small prayer wheel on a stick, spinning it ceaselessly.

Another form of prayer here and in most villages is the mani wall, where small stones placed by pilgrims and carved with an ancient prayer (Om mani padme hum – Hail to the jewel in the lotus) form a wall that can extend for hundreds of meters.

A third form of prayer at the monasteries and villages are the chortens, spired stupas of widely varying sizes, typically shaped by unfired mud bricks and coated in whitewash. These are places to offer prayer, repositories of texts and, in some cases, burial sites. When new, they gleam in the brilliant light of the mountains. As they age, they literally begin to melt like large bulbous candles. The mud bricks slowly deteriorate, the whitewash drains off. Their deterioration is meaningful. For all things material and physical are considered impermanent in life, even these magnificent and thousand year old monasteries.

The repetition from place to place has a soothing quality, and presumably a comforting one for the devout visitor. We all know what to look for – and what we need to do.

But there are magnificent differences to keep the casual visitor engaged. The views of the landscape lying below the monasteries are varied and extraordinary, though the mix of village agriculture, mountain ridges, valleys and rivers are a constant. Some of the wall paintings still shine though hundreds of years old, while others are nearly invisible beneath the residue of burning incense and oil. Though the imagery repeats, some of the art stands out in its visual splendor.

There was the sublime blue buddha in ethereal coupling with his mate at Pemayangtse Monastery near Pelling. Or the enormous and often ornate statues of Buddha in the most heavily trafficked of places like Shey, usually representing the Glorious, Resplendent one, Maitreya. There were side rooms of gloomy, mysterious half-hidden sculptures as in Tikse. And the dark beauty of the millenium-old paintings at Aachi. Some like Diskit offered elaborate images of a famous monastery in Tibet or their own monastery.

At Hemis, the most impressive of the du-khangs rises three or four stories tall in the center, a wooden structure dating back a milllenium with dimmed glass letting in the little light available. Another at Thak-Thok was built out of a cave. At Druk Sangag Choling in Darjeeling, the ceiling of the du-khang was covered with mandalas, paths to enlightenment taken by different gurus, while a few others featured two meter mandalas, pathways specific to their sect. One spiritual leader had taken five years to build a towering three-dimensional mandala at Pemyangtse.

Individually and collectively, the sounds and sights and smells of the monasteries remove you from the everyday physical world and immerse you in an intensely spiritual one. As you descend from the peaks and the long-enduring spiritual centers of the du-khangs, past the prayer wheels and the melting chortens, away from the mystical emblems of ecstatic escape from the wheel of life and death – you return to the physical world slowly, newly aware perhaps of its impermanence and fragility.

At the Junction: Crossroads and Borders of Leh, Ladakh